TV // 1 month ago
Sara Gilbert says her idea for 'The Talk' started as joke
Former "The Talk" host Sara Gilbert discussed how the show came to be and "The Conners" Season 3. 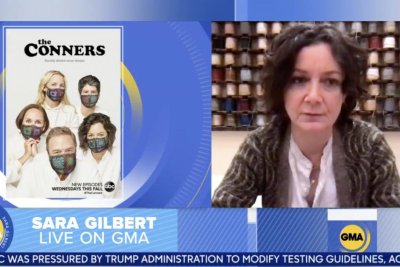 TV // 7 months ago
Sara Gilbert: 'The Conners' Season 3 will 'reflect' COVID-19 pandemic
Sara Gilbert, who plays Darlene on "The Conners," discussed Season 3 after resuming production on the "Roseanne" spinoff.

TV // 1 year ago
'Conners' cast to comment on Sunday's Oscars during commercial break
Stars of "The Conners" will appear as their sitcom characters and comment on nominees and winners during a commercial break for the ABC telecast of the Oscars ceremony Sunday.

TV // 1 year ago
'The Conners' plans live episode to watch N.H. presidential primary
The cast of "The Conners" will watch the New Hampshire primary in a live episode on Feb. 11.

John Stephen Goodman (born June 20, 1952) is an American film, television, and stage actor. He is best known for his role as Dan Conner on the television series Roseanne (1988–1997) for which he won a Best Actor Golden Globe award in 1993, and for appearances in the films of the Coen brothers, with prominent roles in Raising Arizona as an escaped convict, in Barton Fink as a congenial murderer, in The Big Lebowski as a volatile bowler and in O Brother Where Art Thou? as a cultured thief. Additionally, Goodman's voice work has appeared in numerous Disney films, including the voice for "Sulley" in Monsters, Inc.. Having contributed to more than 50 films, Goodman has also won two American Comedy Awards and hosted Saturday Night Live fourteen times.

Goodman was born in Affton, Missouri. His mother, Virginia (née Loosmore), was a store clerk and waitress who worked at Jack and Phil's Bar-B-Que, and his father, Leslie Goodman, was a postal worker who died of a heart attack in 1954. He has a sister, Elisabeth, and a brother, Leslie, with his extended family living in St. Louis, Missouri.

Goodman went to Affton High School, where he played football and dabbled in theater. He then won a football scholarship to Southwest Missouri State University, now called Missouri State University. He pledged the Sigma Phi Epsilon fraternity, but was not formally initiated until several decades later. He has stated that he "wasted a year in the keg," before discovering Southwest Missouri's drama program. He studied there with actors Kathleen Turner and Tess Harper. After a college injury ended his football career, he decided to become a professional actor, leaving Missouri for New York in 1975.

FULL ARTICLE AT WIKIPEDIA.ORG
This article is licensed under the GNU Free Documentation License.
It uses material from the Wikipedia article "John Goodman."
Back to Article
/