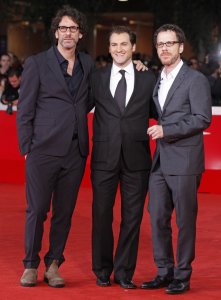 Movies // 4 years ago
'The Revenant' leads the Oscar pack with 12 nominations
"The Revenant" led the field with 12 nods -- including Best Picture and Best Actor for Leonardo DiCaprio -- when Oscar nominations were revealed Thursday.

Joel David Coen (born November 29, 1954) and Ethan Jesse Coen (born September 21, 1957), known together professionally as the Coen brothers, are American filmmakers. The brothers write, direct and produce their films jointly, although until recently Joel received sole credit for directing and Ethan for producing. They often alternate top billing for their screenplays while sharing film credits for editor under the alias Roderick Jaynes. They are known in the film business as "the two-headed director", as they share a similar vision of their films. It is said that actors can approach either brother with a question and get the same answer.

Joel and Ethan Coen grew up in St. Louis Park, Minnesota, a suburb of Minneapolis, in a Jewish household. Their father, Edward, was an economist at the University of Minnesota and their mother, Rena, an art historian at St. Cloud State University.

When they were children, Joel saved money from mowing lawns to buy a Vivitar Super 8 camera. Together, the brothers remade movies they saw on television with a neighborhood kid, Mark Zimering ("Zeimers"), as the star. Their first attempt was a romp titled, Henry Kissinger, Man on the Go. Cornel Wilde's The Naked Prey (1966) became their Zeimers in Zambia, which also featured Ethan as a native with a spear.

FULL ARTICLE AT WIKIPEDIA.ORG
This article is licensed under the GNU Free Documentation License.
It uses material from the Wikipedia article "Joel Coen."
Back to Article
/