TV // 1 month ago
'Superman & Lois' premiere extended, 'Flash' Season 7 start delayed
The premiere episode of "Superman & Lois" on Feb. 23 has been expanded to 90 minutes and will be followed by a half-hour special titled "Legacy of Hope," The CW has announced.

TV // 2 months ago
'Superman & Lois' fight for family in trailer for CW series
"Superman & Lois," starring Tyler Hoechlin and Elizabeth Tulloch as Clark Kent and Lois Lane, will premiere Feb. 23 on The CW.

TV // 4 months ago
Ruby Rose on 'Batwoman': 'I didn't up and leave'
Ruby Rose appeared on "The Tonight Show" and discussed her exit from "Batwoman" and how her departure was the right move for the series. 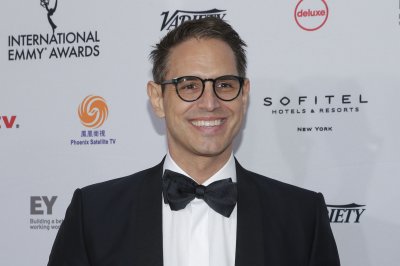 TV // 6 months ago
Live-action 'Powerpuff Girls' in development with Diablo Cody, Greg Berlanti
The CW is developing a live-action adaptation of "The Powerpuff Girls" animated series.

TV // 7 months ago
Javicia Leslie lands lead in 'Batwoman' Season 2
Javicia Leslie will play the titular heroine in "Batwoman" when the show returns to The CW for Season 2 in January.

Greg Berlanti (born May 24, 1972) is an American television writer and producer.

Berlanti was born in Rye, New York. He described his early life in an August 2004 interview with Entertainment Weekly: "We were Italians in a town of WASPs" and his family was not "doing as well as 90% of the community."

FULL ARTICLE AT WIKIPEDIA.ORG
This article is licensed under the GNU Free Documentation License.
It uses material from the Wikipedia article "Greg Berlanti."
Back to Article
/