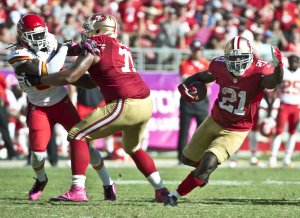 Franklin Delano Gore (born May 14, 1983 in Coconut Grove, Florida) is an American football running back who plays for the San Francisco 49ers of the National Football League.

Gore attended Coral Gables High School, where he excelled as a running back. He had two notable record-breaking games. Against Miami Northwestern High School, he had a then career high 293 yards and two touchdowns. In the next game, he broke that record with 319 yards and six touchdowns. During his senior year in 2000, Gore broke several Dade County single-season records, including rushing yards (2,953) and touchdowns (34). Heavily recruited, he was named the No. 3 prospect in Dade County by The Miami Herald, as well as No. 4 in Florida and No. 18 nationally.

While emerging as a talented football prospect, Gore also focused his attention on improving his academics and assisting his mother, who was battling kidney disease and had started dialysis treatments. Gore bought a mansion for his mother on Star Island with his first check from the NFL. To remain close to home, Gore eventually chose to attend the University of Miami.

FULL ARTICLE AT WIKIPEDIA.ORG
This article is licensed under the GNU Free Documentation License.
It uses material from the Wikipedia article "Frank Gore."