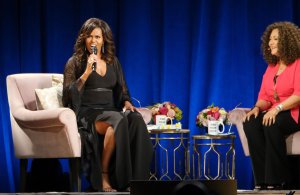 Sports News // 3 weeks ago
Naomi Osaka excited for Olympic 'dream,' suggests tennis 'sick days'
Naomi Osaka says she "could not be more excited" to compete for Japan at the Olympics and wants professional tennis to institute personal-reason "sick days" for athletes ahead of her return from a mental health hiatus.

U.S. News // 6 months ago
Trump announces he won't attend Joe Biden's inauguration
President Donald Trump said Friday he will break with tradition and not attend the inauguration of President-elect Joe Biden on Jan. 20.

As we reaffirm our commitment to hold dear the heroism, strength and compassion we saw on Sept. 11, let's also pledge to keep our military families in our hearts long after this anniversary has passed

No matter what the situation or how many directions they're being pulled in, our military families always stand ready to serve their loved ones, their communities and our country

Michelle LaVaughn Robinson Obama (born January 17, 1964) is the wife of the 44th and incumbent President of the United States, Barack Obama, and is the first African-American First Lady of the United States. Raised on the South Side of Chicago, Obama attended Princeton University and Harvard Law School before returning to Chicago and to work at the law firm Sidley Austin, where she met her future husband. Subsequently, she worked as part of the staff of Chicago mayor Richard M. Daley, and for the University of Chicago Medical Center. In 2011 Forbes Magazine named Michelle Obama the most powerful woman in the world in Forbes Magazine's List of The World's 100 Most Powerful Women

Throughout 2007 and 2008, she helped campaign for her husband's presidential bid and delivered a keynote address at the 2008 Democratic National Convention. She is the mother of two daughters, Malia and Sasha, and is the sister of Craig Robinson, men's basketball coach at Oregon State University. As the wife of a Senator, and later the First Lady, she has become a fashion icon and role model for women, and an advocate for poverty awareness and healthy eating.

Michelle LaVaughn Robinson was born on January 17, 1964, in Chicago, Illinois, to Fraser Robinson III, a city water plant employee and Democratic precinct captain, and Marian (née Shields), a secretary at Spiegel's catalog store. Her mother was a full-time homemaker until Michelle entered high school. The Robinson and Shields families can trace their roots to pre-Civil War African Americans in the American South. Specifically, her roots can be traced to the Gullah people from South Carolina's Lowcountry region. Her paternal great-great grandfather, Jim Robinson, was an American slave in the state of South Carolina, where some of her paternal family still reside. Her maternal great-great-great grandmother, Melvinia Shields, also a slave, became pregnant by a white man. His name and the nature of their union have been lost. She gave birth to Michelle's biracial maternal great-great grandfather, Dolphus T. Shields.

FULL ARTICLE AT WIKIPEDIA.ORG
This article is licensed under the GNU Free Documentation License.
It uses material from the Wikipedia article "First Lady Michelle Obama."
Back to Article
/