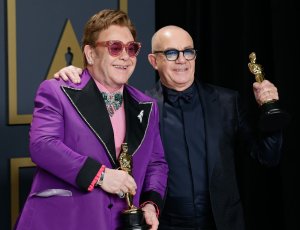 Movies // 1 day ago
Disney producing Elton John farewell tour movie
Disney announced an Elton John documentary Wednesday. The film will center on John's final performance of his farewell tour in November and will be released theatrically.

TV // 2 days ago
'Hocus Pocus 2' set to arrive on Disney+ in September
Disney announced the release date for "Hocus Pocus 2" during the studio's upfronts presentation Tuesday.

U.S. News // 1 month ago
Celebs, other prominent figures to participate in 'Stand Up For Ukraine' on Friday
A number of celebrities and prominent figures are participating in an event Friday to lend their star power to a social media campaign that seeks to raise money for Ukrainian refugees on Friday.

Entertainment News // 2 months ago
Taron Egerton returns to stage after fainting incident
Taron Egerton resumed his role in the West End play "Cock" after passing out during the debut performance.

He's going to hate me for this, but every time he goes to rehab they've been light

The worst thing was having to cancel shows, I hate that. But I'm back on my feet and I'm bouncing around now

As far as I know, there will be no more Billy and Elton shows after the Albany show in New York on March 11th and that breaks my heart since I was so looking forward to coming back there. I'm heartbroken and very cut-up. It's not my decision, it's Billy decision but unfortunately, that's not going to be happening

David and I are stunned by this tragedy. Stephen was the kindest, gentlest soul

Live Nation and Another Planet Entertainment, as well as HP Pavilion at San Jose, were informed today that Billy Joel is unable to tour due to medical reasons

Sir Elton Hercules John, CBE (born Reginald Kenneth Dwight; 25 March 1947) is an English singer-songwriter, composer, pianist and occasional actor. He has worked with lyricist Bernie Taupin as his songwriter partner since 1967; they have collaborated on more than 30 albums to date.

In his four-decade career John has sold more than 250 million records, making him one of the most successful artists of all time. His single "Candle in the Wind 1997" has sold over 33 million copies worldwide, and is the best selling single in Billboard history. He has more than 50 Top 40 hits, including seven consecutive No. 1 US albums, 56 Top 40 singles, 16 Top 10, four No. 2 hits, and nine No. 1 hits. He has won six Grammy Awards, an Academy Award, a Golden Globe Award and a Tony Award. In 2004, Rolling Stone ranked him Number 49 on its list of the 100 greatest artists of all time.

John was inducted into the Rock and Roll Hall of Fame in 1994. Having been named a Commander of the Order of the British Empire in 1996, John received a knighthood from HM Queen Elizabeth II for "services to music and charitable services" in 1998. He has been heavily involved in the fight against AIDS since the late 1980s, and In 1992, he established the Elton John AIDS Foundation and a year later began hosting the annual Academy Award Party, which has since become one of the most high-profile Oscar parties in the Hollywood film industry. Since its inception, the foundation has raised over $200 million. John entered into a civil partnership with David Furnish on 21 December 2005 and continues to be a champion for LGBT social movements. In 2008, Billboard magazine ranked him as the most successful male solo artist on "The Billboard Hot 100 Top All-Time Artists" (third overall, behind only The Beatles and Madonna).

FULL ARTICLE AT WIKIPEDIA.ORG
This article is licensed under the GNU Free Documentation License.
It uses material from the Wikipedia article "Elton John."