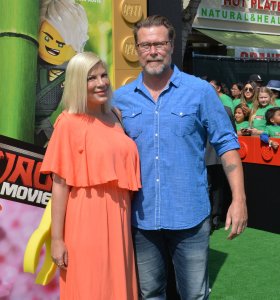 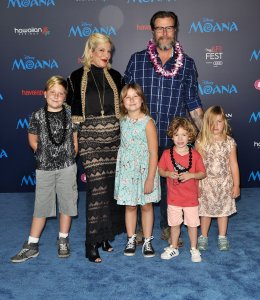 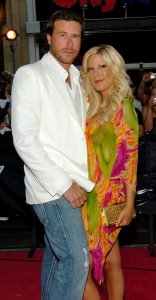 Entertainment News // 4 years ago
Tori Spelling enjoys family dinner on first day of spring
Tori Spelling prepared a special meal with Dean McDermott and their kids after spending the day with son Finn.

Entertainment News // 4 years ago
Tori Spelling and her family support children's hospital
Tori Spelling, Dean McDermott and their five kids were among the stars to help raise funds for UCLA Mattel Children's Hospital.

Movies // 4 years ago
Tori Spelling brings her family to 'Emoji Movie' premiere
Tori Spelling, Dean McDermott and their kids attended the Los Angeles premiere of "The Emoji Movie," along with Anna Faris and Christina Aguilera.

T is in the hospital now with severe stomach pains. We're trying to get her comfortable

I'm so proud that I was able to be by Dean's side ... He's wanted this for so long

McDermott has appeared in many TV and movie roles, including the Kevin Costner film Open Range and the 2009 television film Always and Forever about two high school sweet hearts, in which he starred alongside Rena Sofer and Barbara Eden. He received a Gemini Nomination for Best Supporting Actor in 1997 for his portrayal of small town boy Garet French in Lives of Girls and Women. Since 2007, he and Spelling have co-starred in the reality series, Tori & Dean: Inn Love and "Tori & Dean: Home Sweet Hollywood".

McDermott was born in Toronto, Ontario. He married fellow Canadian and TV presenter/chef Mary Jo Eustace in July 1993. Their son Jack was born on October 10, 1998. In July 2005 they adopted a newborn daughter, Lola.

FULL ARTICLE AT WIKIPEDIA.ORG
This article is licensed under the GNU Free Documentation License.
It uses material from the Wikipedia article "Dean McDermott."