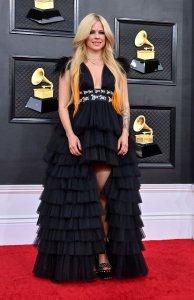 Music // 3 months ago
2022 music festivals: What to expect
Coachella, Bonnaroo, Summerfest, Lollapalooza and many more music festivals are set to rock audiences with star-studded lineups across the U.S. in 2022.

Music // 4 months ago
'Encanto' tops U.S. album chart for 8th week
The soundtrack to the animated movie musical "Encanto" is the No. 1 album in the United States for an eighth week.

I can't wait to get back out on the road

I don't really think about things; I just do them

Avril Ramona Lavigne (pronounced /ˈævrɨl ləˈviːn/; born 27 September 1984) is a Canadian singer-songwriter, fashion designer, actress, and philanthropist. She was born in Belleville, Ontario, but spent the majority of her youth in the small town of Napanee. By the age of 15, she had appeared on stage with Shania Twain; by 16, she had signed a two-album recording contract with Arista (now RCA Records) worth more than $2 million. When she was 17 years old, Lavigne broke onto the music scene with her debut album, Let Go, released in 2002.

Let Go made Lavigne the youngest female soloist to reach #1 in the UK, and the album was certified four-times platinum by the Recording Industry Association of America. By 2009, over 16 million copies had been sold worldwide. Her breakthrough single, "Complicated", peaked at #1 in many countries around the world, as did the album Let Go. Her second album, Under My Skin, was released in 2004 and was her first album to peak at #1 on the U.S. Billboard 200, eventually selling more than 10 million copies worldwide. The Best Damn Thing, Lavigne’s third album, was released in 2007, becoming her third #1 album in the UK Albums Chart and featuring her first U.S. Billboard Hot 100 #1 single, "Girlfriend". Lavigne has scored a total of five #1 singles worldwide, including "Complicated", "Sk8er Boi", "I'm With You", "My Happy Ending" and "Girlfriend". With more than 30 million copies of her albums sold worldwide, Lavigne is currently one of the top-selling artists releasing albums in the U.S., with over 10.25 million copies certified by the RIAA. Her fourth studio album, Goodbye Lullaby, was released on March 8, 2011.

Lavigne branched out from recording music, pursuing careers in feature film acting and designing clothes and perfumes. She voiced a character in the animated film, Over the Hedge, in 2006. That same year, she made her on-screen feature film debut in Fast Food Nation. In 2008, Lavigne introduced her clothing line, Abbey Dawn, and in 2009, she released her first perfume, Black Star, which was followed by her second perfume, Forbidden Rose, in 2010. In July 2006, Lavigne married her boyfriend of two years, Deryck Whibley, lead singer and guitarist for Sum 41. The marriage lasted a little over three years, and in October 2009, Lavigne filed for divorce. Whibley and Lavigne continued to work together, with Whibley producing her fourth album, as well as Lavigne's single, "Alice", written for Tim Burton's film Alice in Wonderland.

FULL ARTICLE AT WIKIPEDIA.ORG
This article is licensed under the GNU Free Documentation License.
It uses material from the Wikipedia article "Avril Lavigne."