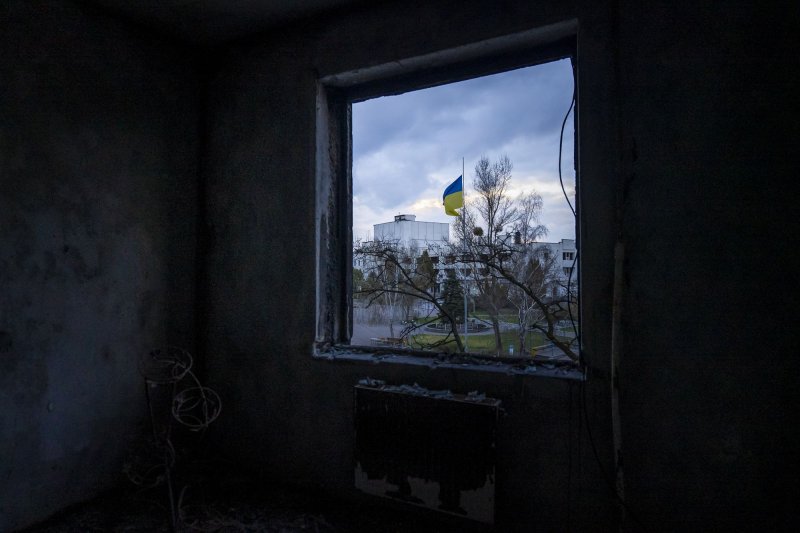 A Ukrainian flag is seen outside the window of a demolished room in an apartment building in Borodyanka, Ukraine, on Thursday. Photo by Ken Cedeno/UPI | License Photo

April 22 (UPI) -- A military commander in Moscow said on Friday that the goal of Russia's new phase of the war is to take full control of southern and eastern Ukraine and connecting the Donbas region with Crimea via land.

Russian Maj. Gen. Rustam Minnekaev, the acting commander of Moscow's Central Military District, said the next step would give forces access to Moldova, were separatists have been active with help from the Kremlin.

Russian President Vladimir Putin said earlier this week that a new phase of the war has begun with Moscow shifting its focus to eastern Ukraine and the Donbas, which includes Donetsk and Luhansk -- two separatist-held areas that have rebelled against Ukraine for years.

The Russian commander said the new goals are critically important to Putin's strategy.

"This [control over Donbas] will enable us to establish a ground corridor to Crimea and to gain influence over the vitally important Ukrainian [military] facilities, the Black Sea ports, which service deliveries of the agricultural and metallurgical products to other countries," Minnekayev said, according to the state-run TASS news agency.

"We did not start this war, but we will put an end to it," he added -- although Moscow did begin the fighting on Feb. 24.

While Russia has captured a major portion of the key southern port city of Mariupol, forces loyal to Putin have failed to root out a resistance of Ukrainian fighters occupying a large steel plant there. Ukraine also remains in control of other key port cities like Kyiv, Mykolaiv and Odesa.

Ukrainian Deputy Prime Minister Iryna Vereshchuk said there will be no organized evacuation of civilians from Mariupol or eastern cities because of danger along any possible humanitarian corridors.

Some civilians were evacuated from Mariupol earlier this week through a humanitarian corridor, but those who escaped amounted to a small convoy of women, children and the elderly.

"I appeal to all those who are waiting for the evacuation: Be patient, please hold on," Vereshchuk said, according to The New York Times.

The United Nations human rights office said on Friday that it's seen more evidence of war crimes and described Russia's war as a "horror story of violations against civilians."

The office noted that records indicate that at least 50 civilians in the town of Bucha were unlawfully killed. Bucha, near Kyiv, is where Ukrainian forces found mass graves and remains of civilians earlier this month that shocked the world.

U.N. Human Rights Commissioner Michelle Bachelet said that almost everyone in Bucha was directly affected by the atrocities.

"We know much more needs to be done to uncover what happened there and we also know Bucha is not an isolated incident," she said according to The Guardian.

Meanwhile, investigators near Mariupol are looking into reports of thousands of bodies buried there by Russian troops to conceal the killings. The existence of the graves was reported on Thursday.

World News // 2 days ago
Trial starts in Russia for WNBA star Brittney Griner
July 1 (UPI) -- The Moscow cannabis oil possession trial of WNBA player Brittney Griner began Friday, with Griner facing a possibility of up to 10 years in a Russian prison if convicted.