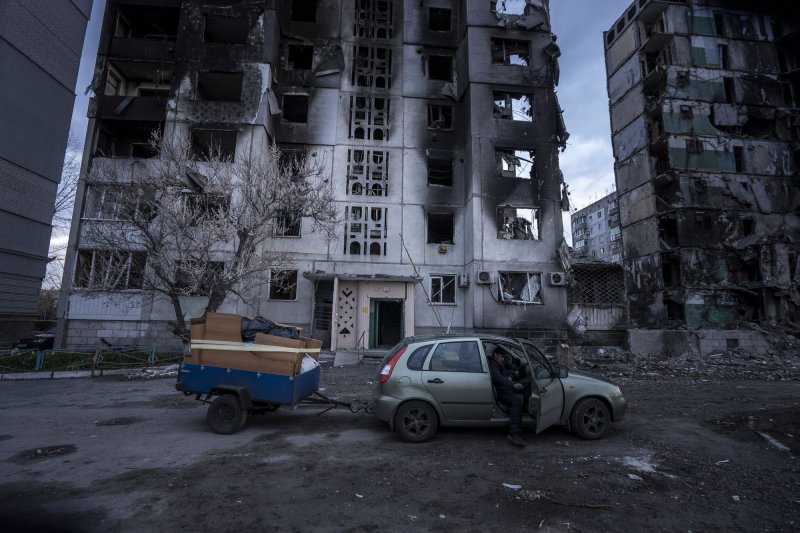 A family gets in the car after loading up belongings from their apartment in Borodyanka, Ukraine, on Thursday. Prime Minister Denys Shmyhal said it will cost $600 billion to rebuild the country following Russia's war. Photo by Ken Cedeno/UPI | License Photo

The prime minister made the appeal Thursday during a ministerial meeting held by the IMF and the World Back in Washington, D.C., as the Russia's war nears entering its third month.

Since Russia launched its invasion on Feb. 24, more than 2,340 civilians have been killed with another 5 million forced to flee. The war has also laid destruction to the nation's buildings, and the estimate Shmyhal gave Thursday is an increase of almost $50 billion from the figure he gave mid-March.

Shmyhal detailed during the bank's spring meeting about "Russia's plans to destroy Ukraine and the Ukrainian economy" and that in the short term Kyiv will require an estimated $4 billion to $5 billion a month over the next six months to survive.

"Blocked ports, strikes on factories, attempts to disrupt sowing, destroyed cities. It's all part of that plane," he said in a statement about his remarks made during the meeting.

Together with President @ZelenskyyUa spoke at Spring Meetings 2022, held by @WorldBank & @IMFNews. Told about russia's attempts to destroy #Ukraine and its economy. Our damage is more than $500 billion. We are developing a recovery plan and call on the whole world to support ! pic.twitter.com/f9r9tSbA85— Denys Shmyhal (@Denys_Shmyhal) April 21, 2022

The World Bank forecast earlier this month that Ukraine's economy could contract by 45% this year with a worse case scenario seeing its gross domestic product shrink by 75%.

Earlier this week, it was announced that Ukrainian President Volodymyr Zelensky and IMF Director Kristalina Georgieva had discussed post-war reconstruction efforts, and Shmyhal said Thursday that he urges members of the Washington-based lender to donated 10% of their special drawing rights to Ukraine as an answer to the economic crisis.

SPDs are an international reserve asset that the IMF created to supplement the reserves of its member nations, and if the nations allot Kyiv 10% of their stakes in the reserve, it would give the country access to billions of dollars that Shmyhal said they can use to "continue to fulfill our social obligations, maintain business, restore critical infrastructure."

The IMF in March approved the disbursement of $1.4 billion for Ukraine through its Rapid Financing Instrument.

On Thursday, Georgieva agreed with Shmyhal's estimate that Ukraine will need $5 billion a month over the next three months just to keep its economy functioning.

"So, more external financing is necessary -- especially concessional funding and fast-disbursing grants," she said during her opening marks at the roundtable.

"We must hope and pray for peace to come quickly -- when it comes we pursue the opportunities it will bring to rebuild a strong and prosperous Ukraine," she said. "For now, our support to Ukraine must allow the country to continue to function and face the challenges created by the war."

World News // 6 hours ago
Tanzania's government installs broadband Wi-Fi on Mount Kilimanjaro
Aug. 18 (UPI) -- Tourists climbing Mount Kilimanjaro will be able to access the internet while scaling the volcanic mass after the government of Tanzania installed a broadband network at Uhuru Peak.

World News // 11 hours ago
Grades drop for British students taking first exams in three years
Aug. 18 (UPI) -- Students in the U.K. saw their grades drop this year, the first time in three years students have taken exams because of the COVID-19 pandemic.

World News // 15 hours ago
Women inside Israel's spy agency take over key role of watching Iran
Aug. 18 (UPI) -- For the first time, two women have been appointed to take over executive-level positions inside Israel's foreign intelligence agency, and both will be mainly charged with keeping an eye on Iran and its nuclear program.

World News // 17 hours ago
At least 21 dead after suicide attack at Afghan mosque, including prominent cleric
Aug. 18 (UPI) -- Authorities said Thursday that a suicide bombing that targeted a mosque in Afghanistan's capital has killed almost two dozen people, including a prominent Muslim cleric, and the death toll may yet rise again.
Advertisement