March 23 (UPI) -- Ukraine agreed on Wednesday to a new deal with Russia to open several humanitarian corridors that can be used to evacuate refugees, officials said as Russia kept up attacks across the country.

There was no mention of a corridor out of Mariupol, a southern port city that has been under constant Russian attack and where many civilians have been trapped.

Vereshchuk said that people in Mariupol, however, could find transportation out of the area in nearby Berdyansk.

Meanwhile, Russian troops kept up shelling in the Ukrainian capital Kyiv on Wednesday and attempted to tighten their grip on Mariupol, where Ukrainian President Volodymyr Zelensky said that at least 100,000 people are still trapped.

Zelensky said that he and officials are doing "everything we can to free our people," according to The Washington Post.

Britain's defense ministry said that Russian forces are likely reorganizing now before resuming a large-scale offensive to advance from Kharkiv in the north and Mariupol in the south.

Russia's ground attack is being aided by almost two dozen warships in the Black Sea that are firing cruise missiles into Ukraine off the Crimea coast, according to U.S. officials. NATO officials said the Belarusian military is now taking steps to enter the war to benefit Russia and could soon send troops into Ukraine.

The governor of the Luhansk region, in eastern Ukraine, also said Wednesday that Russia has agreed to a new local cease-fire to allow trapped civilians to leave. The governor, Serhiy Haidai, said in a post to Telegram that the truce would begin Wednesday morning.

Ukraine's chief prosecutors' office said in an update on Wednesday that at least 121 children have been killed in the country since Russia began its invasion on Feb. 24, and that close to 200 other have been injured.

Kremlin spokesman Dmitry Peskov, in an interview with CNN, refused to commit to taking nuclear weapons off the table in the fight against Ukraine, saying that Moscow considers Ukraine to be an "existential threat."

"It's not the way a responsible nuclear power should act," Kirby said, according to the Post.

U.S. President Joe Biden is traveling to Belgium on Wednesday for a NATO summit and a meeting with Polish President Andrzej Duda on Friday, a trip that's entirely focused on Russia's war in Ukraine.

Biden has sent hundreds of U.S. troops to Poland and other areas in Eastern Europe to support NATO forces and Ukraine and has warned Russian President Vladimir Putin against using biological and chemical weapons.

In Warsaw, Poland's interior minister said on Wednesday that 45 Russian diplomats suspected of posing as spies have been expelled from the country.

"With full consistency and determination, we are breaking up the network of Russian security-service agents in our country."

Scenes from the Russian war on Ukraine 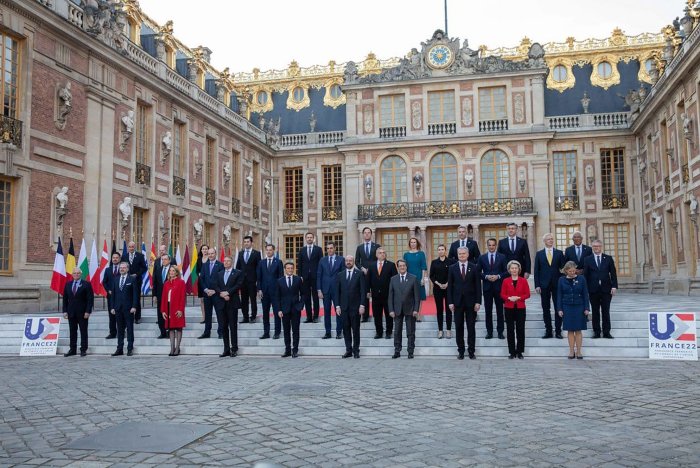 European Union leaders attend a summit at the Chateau de Versailles near Paris on March 11, 2022. Photo by the European Union/ UPI | License Photo

World News // 3 hours ago
Blasts at Crimea airfield take out Russian planes; deadly rocket fire in east Ukraine
Aug. 11 (UPI) -- Several Russian warplanes have been destroyed in dramatic explosions at a base in Crimea, the part of Ukraine that was annexed by Russia eight years ago, according to satellite imagery.

World News // 18 hours ago
London offers all children polio boosters after more virus found in city sewers
Aug. 10 (UPI) -- Health officials in London are offering polio vaccine boosters to all children between the ages of one and nine after more polio virus was found in the city's sewers.

World News // 20 hours ago
Speaker Nancy Pelosi: 'We will not allow China to isolate Taiwan'
Aug. 10 (UPI) -- U.S. House Speaker Nancy Pelosi, D-Calif., said during a Capitol press conference Wednesday that she went to Taiwan during her Asian-Pacific trip to "salute a thriving democracy."

World News // 23 hours ago
French rescuers euthanize Begula whale stuck in river
Aug. 10 (UPI) -- An 1,800-pound Begula whale that got stuck in France's Seine River for more than a week earlier this month has died while being moved back out to sea, officials said Tuesday.

World News // 1 day ago
French wildfire reignites, forcing thousands to evacuate as 16 homes were destroyed
Aug. 10 (UPI) -- A massive wildfire that reignited in southwest France has forced the evacuation of more than 6,000 people. The fire in the Gironde region burned another 14,826 acres Wednesday.
Advertisement