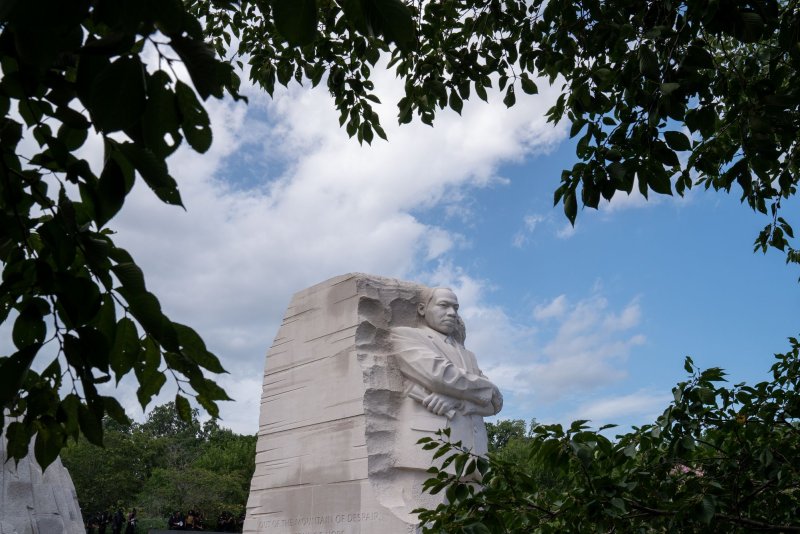 The Martin Luther King Memorial in Washington, D.C., is closed to the public on MLK Day due to heightened security ahead of President-elect Joe Biden's inauguration. File Photo by Ken Cedeno/UPI | License Photo

"The National Day of Service is an opportunity for all Americans to unite and serve at a time when the global pandemic calls on all of us to work together and support our communities," a statement by the inauguration committee said.

The White House designated Monday as a working day for President Donald Trump.

A daily schedule released by the White House gave no indication whether Trump will mark the federal holiday.

"President Trump will work from early in the morning until late in the evening," the schedule, issued to reporters, said. "He will make many calls and have many meetings."

RELATED MLK III opposes Trump visit to N.J.: 'This is not the America we should be'

"If anyone had a right to question whether our democracy was worth redeeming, it was Dr. Martin Luther King, Jr. Because in the face of billy clubs and lynchings, poll taxes and literacy tests, he never gave in to violence, never waved a traitorous flag or gave up on our country," Obama tweeted Monday. "On #MLKDay, we celebrate his life but we're also called to live out his values through service of our own," Obama added.

The Martin Luther King Jr. Memorial in Washington, D.C., though, is closed to the public through Thursday for security reasons connected with Wednesday's inauguration.

U.S. News // 6 hours ago
Labor board says Apple violated Labor Relations Act in Atlanta store
Dec. 6 (UPI) -- Apple strong-armed employees at its store in Atlanta's Cumberland Mall to quell talks of unionization, according to the National Labor Relations Board.

U.S. News // 8 hours ago
L.A. County COVID-19 surge continues
Dec. 6 (UPI) -- Los Angeles County is reporting a surge in COVID-19 cases, hospitalizations and deaths. and If the upsurge continues it could trigger an indoor mask mandate.

U.S. News // 9 hours ago
Gallup poll: Inflation causing financial hardship in over half of U.S. households
Dec. 6 (UPI) -- A majority of Americans are experiencing financial difficulty as a result of high inflation, according to a Gallup poll released Tuesday.