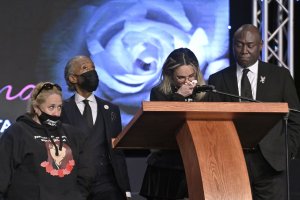 U.S. News // 3 weeks ago
Rev. Al Sharpton demands name of police officer in eulogy for Patrick Lyoya
Rev. Al Sharpton on Friday told mourners at the funeral of Patrick Lyoya that it's an insult to the Black man's family that the Grand Rapids Police Department refuses to release the name of the officer who shot him.

U.S. News // 5 months ago
U.S. leaders, colleagues pay tribute to pioneering Black lawmaker Carrie Meek
Tributes to trailblazing Black congresswoman Carrie Meek of Florida poured in from across the country Monday, a day after her death in Miami at age 95,

U.S. News // 5 months ago
Defendant Travis McMichael testifies in Ahmaud Arbery murder trial
Travis McMichael, one of three White men charged with murder in the death of Ahmaud Arbery last February in Georgia, took the stand Wednesday as the first witness for the defense.

We cannot have the perception that the rules changed because of some favoritism, or because some people didn't want to see Senator Obama as the nominee, when he legitimately pulled ahead

I firmly believe that changing the rules now and seating delegates from Florida and Michigan at this point would not only violate the Democratic Party's rules of fairness, but also would be a grave injustice

This report confirms that we are not merely 'rabble rousing' but that we are responding to institutional neglect by the U.S. Department of Justice to protect the civil rights of American citizens

Alfred Charles "Al" Sharpton, Jr. (born October 3, 1954) is an American Baptist minister, civil rights activist, and radio talk show host. In 2004, he was a candidate for the Democratic nomination for the U.S. presidential election. He hosts his own radio talk show, Keepin’ It Real, and he makes regular guest appearances on Fox News (such as The O'Reilly Factor) CNN, and MSNBC.

Sharpton's supporters praise "his ability and willingness to defy the power structure that is seen as the cause of their suffering" and consider him "a man who is willing to tell it like it is". Former New York Mayor Ed Koch, a one-time foe, said that Sharpton deserves the respect he enjoys among African Americans: "He is willing to go to jail for them, and he is there when they need him."

His critics describe him as "a political radical who is to blame, in part, for the deterioration of race relations". Sociologist Orlando Patterson has referred to him as a racial arsonist, while liberal columnist Derrick Z. Jackson has called him the black equivalent of Richard Nixon and Pat Robertson. Sharpton sees much of the criticism as a sign of his effectiveness. "In many ways, what they consider criticism is complimenting my job," he said. "An activist’s job is to make public civil rights issues until there can be a climate for change."

FULL ARTICLE AT WIKIPEDIA.ORG
This article is licensed under the GNU Free Documentation License.
It uses material from the Wikipedia article "Al Sharpton."