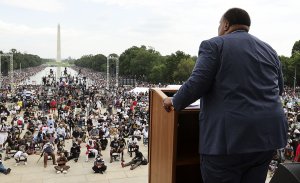 U.S. News // 1 year ago
A few open seats, some tight races define House election slate
While Democrats expect to keep control of the U.S. House of Representatives in Tuesday's election, several close and interesting races are on the ballot.

U.S. News // 1 year ago
Thousands at major D.C. rally call for new leadership, end of racism in U.S.
Civil rights activists, lawmakers and thousands of citizens assembled in Washington, D.C., Friday to rally against police brutality and call on voters to spur change with the November presidential election.

U.S. News // 1 year ago
MLK III opposes Trump visit to N.J.: 'This is not the America we should be'
Martin Luther King III took jabs at President Donald Trump at a rally in New Jersey Tuesday night while protesting his visit to lend support to Rep. Jeff Van Drew's re-election campaign.

U.S. News // 1 year ago
Activists gather for fourth year of worldwide Women's Marches
Thousands took to the streets Saturday in Washington, D.C., -- and elsewhere across the globe -- to participate in the fourth annual Women's March advocating for women's equality.

NFL // 4 years ago
Martin Luther King III joins Miami Dolphins minicamp for voting initiative
The Miami Dolphins became the first NFL team to organize all of its players to register to vote on Thursday at mandatory minicamp.

Martin Luther King III (born October 23, 1957) is an American human rights advocate and community activist. He is the eldest son and oldest living child of civil rights leader Dr. Martin Luther King, Jr. and Coretta Scott King. His siblings are Dexter Scott King, Rev. Dr. Bernice Albertine King, and the late Yolanda Denise King. King attended The Galloway School and went on to Morehouse College, which was the same school his father, his grandfather and his great-grandfather attended. He received his B.A. in Political Science from Morehouse in 1979.

Martin Luther King III was born on October 23, 1957 to human rights advocate Martin Luther King, Jr. and Coretta Scott King. His mother had reservations about naming him after his famous father, "realizing the burdens it can create for the child," but King, Jr. always wanted to name his son Martin Luther III. He was raised in Vine City, an urban neighborhood in Atlanta, Georgia, and was ten years old when his father was assassinated. King lived with his mother in his childhood home until his adulthood. As an adult, King was a shy man who rarely socialized, and friends have claimed he tends to overwork, in part due to the pressure to live up to his father's name; one friend, Rev. E. Randel T. Osburn, said of King, “Watching him is like watching somebody trying to outrun themselves. It’s like there’s a ghost in front of him and he’s always trying to catch it.”

On June 26, 1985 Martin Luther King III was arrested, along with his mother and sister, Bernice A. King, while taking part in an anti-apartheid protest at the Embassy of South Africa in Washington, D.C.

FULL ARTICLE AT WIKIPEDIA.ORG
This article is licensed under the GNU Free Documentation License.
It uses material from the Wikipedia article "Martin Luther King III."