Cheney says he would run again

DALLAS, May 7 (UPI) -- Vice President Dick Cheney has told the president that will be his running mate again in 2004, The Dallas Morning News reported Wednesday.

"The president has asked me if I would serve again as his running mate," he told the newspaper during an interview. "I've agreed to do that."

Cheney, who lived in Dallas when he headed the Halliburton Co., was at Southern Methodist University for a lecture Tuesday.

Cheney told The News his health would not prevent him from joining President Bush on the ticket next year. He has suffered four heart attacks.

"It's good enough. Everything is fine," he said, speaking of his health. "If I ran into problems where I felt I couldn't serve, I'd be the first to say so and step down."

Cheney was battling a case of laryngitis and appeared to be speaking in a almost a whisper at times.

"I've got a doc with me 24 hours a day who watches me very carefully. There's one outside there now," he said, pointing to a nearby door. "He's part of the entourage that supports me. The president has one and I have one. So everything looks good to go."

Cheney said he did not know when Bush would formally announce his candidacy for a second term.

Southern Methodist University announced before Cheney's appearance that his interview by Washington journalist Hugh Sidey would be off the record. Cameras were allowed to film the event without sound for the first 10 minutes.

The News, one of the event sponsors, was not consulted about the rules.

"As one of the event's sponsors, we were not consulted in advance about the ground rules for Vice President Cheney's lecture," said Robert W. Mong Jr., president and editor of the newspaper. "Had we been asked, we would not have found the rules acceptable. The event should have been open."

The News reported that Cheney told the audience that the attacks of Sept. 11, 2001, reshaped the landscape of the country and American foreign policy.

"We realize that we really can't afford to wait," he said about pre-emptive strikes against terrorism. "It's been a little unsettling for our allies."

Cheney also told the packed auditorium at SMU that he believed that Saddam Hussein was dead. He said the White House had received intelligence information about Saddam's location in Baghdad before U.S. air attacks on the city began the war.

"I think we did get Saddam Hussein," Cheney said. "He was seen being dug out of the rubble and wasn't able to breathe."

Cheney said there was no way to know for sure if the attack was a success.

U.S. News // 3 hours ago
At least 1 dead after partial condo building collapse near Miami
June 24 (UPI) -- At least one person is dead and authorities are searching for more victims after a condominium building near Miami partly collapsed early Thursday.

U.S. News // 3 hours ago
CDC: Rare heart inflammation cases linked to Pfizer, Moderna vaccines
June 24 (UPI) -- The U.S. Centers for Decease Control and Prevention said more than 1,200 Americans mostly under the age of 30 who have received either the Pfizer-BioNTech or Moderna COVID-19 vaccine have developed heart inflammation.

Top News // 5 hours ago
On This Day: Isner defeats Mahut in longest pro-tennis match in history
On June 24, 2010, John Isner defeated Nicolas Mahut in a first-round match at Wimbledon, the longest match in pro-tennis history. 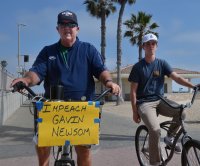