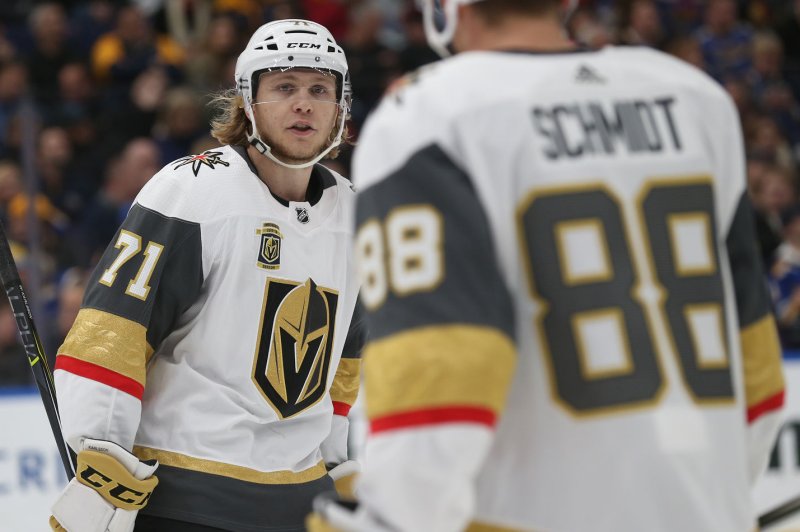 Sept. 9 (UPI) -- The Vegas Golden Knights scored three second-period goals and Robin Lehner made 24 saves in a 3-0 shutout victory over the Dallas Stars in Game 2 of the Western Conference finals to even the Stanley Cup playoffs series.

Paul Stastny, William Karlsson and Tomas Nosek each lit the lamp in the win Tuesday at Rogers Place in Edmonton, Alberta, Canada. The Stars and Golden Knights are tied with one win apiece as they enter Game 3 Thursday in Edmonton and vie for a spot in the 2020 Stanley Cup Final.

"I think everybody was gripping their stick a little tight," Golden Knights center Chandler Stephenson told reporters. "We are at our best when we have swagger and are making plays.

"It was nice to get that mojo back and even the series."

Defenseman Brayden McNabb slid a pass to left wing Max Pacioretty to set up the first goal. Pacioretty then fired a pass in front of the net for Stastny, who hit a one-timer past Stars goaltender Anton Khudobin 4:53 into the bridge frame.

Karlsson scored on a power play less than four minutes later. Stastny flicked a pass back to Vegas defenseman Shea Theodore near the Dallas blue line during that play. Theodore then sent a pass to his left to Karlsson. The Golden Knights center skated up the ice before he rifled a backhanded missile past Khudobin's glove side for a 2-0 lead.

Vegas had a goal taken away for an infraction midway through the second period before Nosek beat Khudobin for a third time with 5:28 remaining in the frame.

Stephenson, Nicolas Roy and Nosek formed a triangle in transition to set up the final score. Stephenson collected the puck on the left flank at the start of the play. The Vegas center then exchanged give-and-go passes with Roy before he got the puck back and tapped a quick feed to Nosek, who slapped a once-timer by Khudobin.

"Tonight we got our game back," Golden Knights coach Peter DeBoer said. "Once we got our first goal, we looked like we normally do, which is making plays, finding space and sticking pucks in the net."