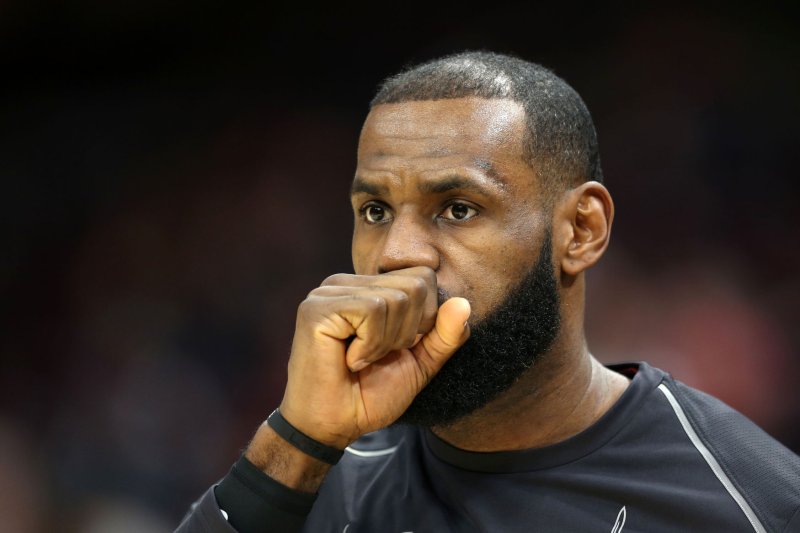 LeBron James and the Cleveland Cavaliers will look to bounce back after Thursday's overtime loss to the Golden State Warriors in Game 1 of the NBA Finals on Thursday. Photo by Aaron Josefczyk/UPI | License Photo

Random day-after dribbles after the visiting Cleveland Cavaliers' 124-114 loss to the Golden State Warriors in overtime in Game 1 of the NBA Finals on Thursday.

1. So much happened, it's hard to know where to begin. Actually, it's the end that should quickly be forgotten.

2. Let's start with The Call. It happened with the Cavaliers leading by two points and Kevin Durant driving to the basket. LeBron James stepped in Durant's way. Charge, said official Ken Mauer. Then the refs went to the tape. Block, Mauer insisted after the review. Instead of the ball and a two-point lead with 36 seconds left in regulation, Durant made the free throws he didn't deserve to tie it.

3. Mauer and Tony Brothers are two of the league's worst officials. Consistently awful. Yet the NBA thinks they're great. In fact, Mauer is actually a crew leader. And he led this crew right down the tubes.

4. That's not why the Cavs lost the game, of course. They still had possession of the ball after the free throws. They just weren't as in control as they should have been -- and the referees should never play such a huge role in determining the outcome of a game.

5. I'm not going to focus on that anymore, other than to say the NBA has had a real officiating problem since the days of disgraced ref Tim Donaghy. And Mauer's call was indeed disgraceful. Let's hope the league addresses this problem after the season. Please, Commissioner Adam Silver. Do something. We are begging you.

6. But again, the Cavs had their chances. I saw someone posted something on Twitter about George Hill and his missed free throw. That took place after he made one to tie it at 107-all with 4.7 seconds left. If Hill makes the second free throw, well, then the outcome may have been different. J.R. Smith never would made that great play by snatching the offensive rebound ... then blowing it by dribbling to the top of the 3-point line and running out the clock.

9. If J.R. really knew the score, then why didn't he call a timeout? Or why didn't he put the ball back up after grabbing the rebound? If you know the score is tied, in that situation, with time running out -- the last thing you do is start dribbling toward the top of the key.

10. All of this overshadows what was one of the most magnificent scoring displays in Finals history, courtesy of James and his 51 points. It was definitely the finest performance by a member of the Cavaliers in Finals history. And that's saying a lot, considering LeBron has been a part of every one of the Cavs' Finals teams.

11. If only Hill had made that free throw. You can't really blame the guy. As I wrote in my Five Quick Takes, it happens. It was just surprising to see Hill miss the SECOND. You made the first. The pressure is off. But somehow, the second missed badly.

12. Meanwhile, it will be real interesting to see what happens with Tristan Thompson, who tried to shove the ball in Draymond Green's loud mouth. Green probably deserved a taunting technical, but it was pretty evident Mauer didn't want to give him one. The refs knew Green already had picked up a technical earlier, the result of complaining about a foul call after he basically took out LeBron's eye. The refs did not want to give Green another technical and set him up for a possible suspension.

13. So will the league suspend Thompson for his late-game meltdown? Or Kevin Love, who left the bench and wandered onto the floor during the fracas?

14. I'd sure hope not. It would be another black eye for the league and the often confusing (and sometimes downright questionable) manner in which it handles such judgement calls.

15. Love played great, by the way. It's true he finished just 1-of-9 on threes -- but the one he made was a biggie late in regulation. He also demanded the ball near the basket and powered his way to 21 points and 13 rebounds.

16. Problem is, no one else could really score. Smith had 10 points, and Larry Nance Jr. went for a very underrated nine with 11 boards.

17. We all said the Cavs needed four guys to hit double figures to avoid a blowout. They didn't get it, and they almost won anyway. So may even say they should have won.

18. But there is no margin for error against a team that features Steph Curry (29 points), Kevin Durant (26), Klay Thompson (24) and Green (13). The Cavs had about four very obvious errors. That is, like, four obvious errors too many on the road in the Finals.

19. The Cavs destroyed the Warriors on the boards, 53-38. They actually did a nice job on Durant, who killed them at this time last year, but finished 8-of-22 shooting Thursday. In fact, with the exception of overtime and a stretch there in the third quarter, the Cavs were at least solid defensively all night.

21. So what does it all mean? It means you need to remember what you did right here, build on it, and carry it with you for the rest of the series. Play like you did in the first 48 minutes of Game 1 in the next one, and you'll be right there again, with another chance to steal it. Play like this at home, and you will win. That is all the Cavs need to focus on. Forget the blocking call, forget the missed free throw, forget the meltdowns at the end. Don't be deflated; be determined.

22. Final word from LeBron: "We've gotta move on. This game is over and done with. We had our opportunities. I will never give up on J.R. I never give up on any of my teammates. I don't think that even needs to be said."

23. Actually, here's the final word: Enjoy what James is doing. Like Elgin Baylor or Wilt Chamberlain or Bill Russell or Magic Johnson and Michael Jordan, what LeBron is doing now will live on forever. And we all get to witness it.

This article was originally published on .>AmicoHoops.net