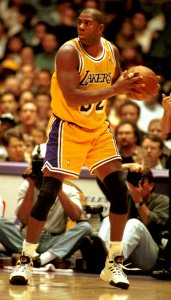 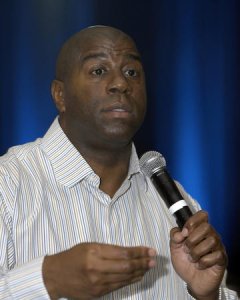 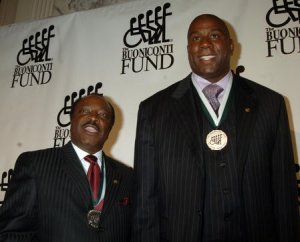 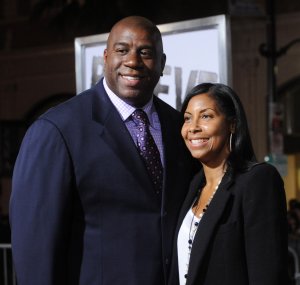 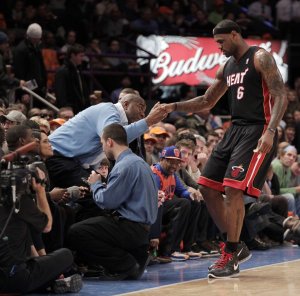 U.S. News // 5 months ago
Kobe Bryant's widow Vanessa remembers husband, daughter at LA memorial
Vanessa Bryant delivered an emotional tribute to her late husband Kobe Bryant and daughter Gianna during a memorial in Los Angeles on Monday honoring them and seven others who died in a helicopter crash last month. 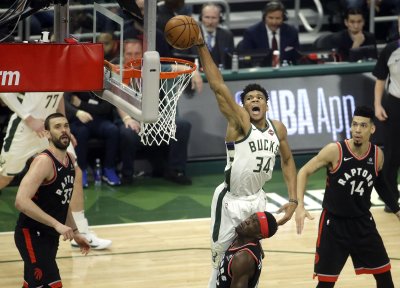 NBA // 1 year ago
Adam Silver confident in Lakers' future
NBA commissioner Adam Silver says he is optimistic the Los Angeles Lakers will turn around their recent struggles in the near future.

We seemed to be linked together ever since that championship game

We seemed to be linked together ever since that championship game

Every community is going to have blacks, whites, Hispanics, Asians and you're going to encounter all kinds of people through school, through business

In what sport, if any, do you currently participate on a regular basis? Jogging, bowling, tennis

Earvin "Magic" Johnson Jr. (born August 14, 1959) is a retired American professional basketball player who played point guard for the Los Angeles Lakers of the National Basketball Association (NBA). After winning championships in high school and college, Johnson was selected first overall in the 1979 NBA Draft by the Lakers. He won a championship and an NBA Finals Most Valuable Player Award in his rookie season, and won four more championships with the Lakers during the 1980s. Johnson retired abruptly in 1991 after announcing that he had contracted HIV, but returned to play in the 1992 All-Star Game, winning the All-Star MVP Award. After protests from his fellow players, he retired again for four years, but returned in 1996, at age 37, to play 32 games for the Lakers before retiring for the third and final time.

Johnson's career achievements include three NBA MVP Awards, nine NBA Finals appearances, twelve All-Star games, and ten All-NBA First and Second Team nominations. He led the league in regular-season assists four times, and is the NBA's all-time leader in assists per game, with an average of 11.2. Johnson was a member of the "Dream Team", the U.S. basketball team that won the Olympic gold medal in 1992.

Johnson was honored as one of the 50 Greatest Players in NBA History in 1996, and enshrined in the Basketball Hall of Fame in 2002. He was rated the greatest NBA point guard of all time by ESPN in 2007. His friendship and rivalry with Boston Celtics star Larry Bird, whom he faced in the 1979 NCAA finals and three NBA championship series, were well documented. Since his retirement, Johnson has been an advocate for HIV/AIDS prevention and safe sex, as well as an entrepreneur, philanthropist and motivational speaker.

FULL ARTICLE AT WIKIPEDIA.ORG
This article is licensed under the GNU Free Documentation License.
It uses material from the Wikipedia article "Magic Johnson."
Back to Article
/