In 1981, U.S. President Ronald Reagan, in a nationwide address, said the United States was in "the worst economic mess since the Great Depression" and called for sweeping spending and tax cuts.

In 1991, U.S. President George H.W. Bush sent his top military advisers to Saudi Arabia to decide whether a ground assault was needed to liberate Iraqi-occupied Kuwait.

In 1996, a judge ordered U.S. President Bill Clinton to testify in the Whitewater land dispute trial. He later did so via videotape.

In 2004, speaking out strongly against his war critics, U.S. President George Bush said Iraq's nightmare was over and the United States was safer because he made the tough call to go to war.

In 2005, a Moroccan family of four was charged in Spain in the March 11 Madrid train bombings that killed 191 people.

In 2007, U.S. astronaut Lisa Marie Nowak was arrested on several charges, including attempted kidnapping, after she drove from Houston to Orlando, Fla., to confront another officer whom she viewed as a rival for a fellow astronaut.

Odd News // 13 minutes ago
Police free man from handcuffs after girlfriend lost the key
Sept. 18 (UPI) -- Police in Britain responded to an early morning call from a man who became trapped in a pair of handcuffs in an apparent case of romance gone awry.

Odd News // 5 hours ago
Watch: 'Uncatchable pig' gives Missouri police the slip
Sept. 18 (UPI) -- Police in Missouri shared body camera footage of a failed attempt to capture an "uncatchable pig" that has been wandering the community for days.

Odd News // 23 hours ago
Watch: Alligator swims through Alabama woman's flooded yard
Sept. 17 (UPI) -- An Alabama woman shared video of the surprising sight that greeted her when she looked out into her Hurricane Sally-flooded front yard: an alligator having a swim.

Odd News // 23 hours ago
Watch: Man spotted wearing live snake as a mask on city bus
Sept. 17 (UPI) -- Transportation officials in a British city responded to viral photos from a municipal bus by reminding residents that snakeskin is not a good material for face masks -- especially when still attached to a snake.

Odd News // 1 day ago
Woman stranded with flat tire discovers she won $100,000
Sept. 17 (UPI) -- A North Carolina woman stranded on the side of a road with a flat tire had her day turn around when she checked her email and discovered she had won a $100,000 lottery jackpot. 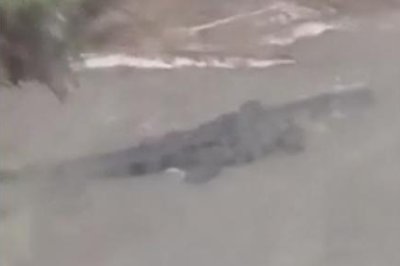