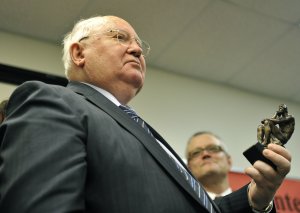 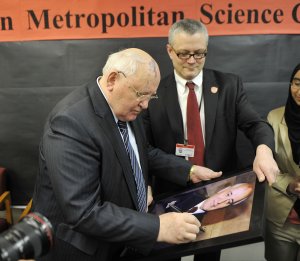 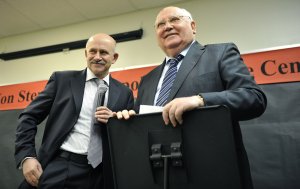 TV // 1 year ago
Tom Brokaw retires, puts trust in 'new generation of NBC News'
NBC News announced the retirement of Tom Brokaw after 55 years with the network. In a statement, Brokaw put his faith in his successors.

U.S. News // 2 years ago
30 years after fall of wall, Ronald Reagan statue to be unveiled in Berlin
U.S. Secretary of State Mike Pompeo, in Berlin for ceremonies marking the 1989 fall of the Berlin Wall, will unveil a statue of former President Ronald Reagan.

It seems once again that it is a matter of incompetence, irresponsibility, mismanagement

Analysis: Poorly maintained pipelines cause explosion in Moscow May 11, 2009

Sometimes when you stand face to face with someone, you cannot see his face

We will never again return to being a single-party (state), though they will try to pull us in that direction

This administration wants everyone to follow suit, allies and others

Mikhail Sergeyevich Gorbachev (Russian: Михаил Сергеевич Горбачёв, tr. Mikhail Sergeyevich Gorbachyov, IPA:  ( listen); born 2 March 1931) is a former Soviet statesman, having served as General Secretary of the Communist Party of the Soviet Union from 1985 until 1991, and as the last head of state of the USSR, having served from 1988 until its dissolution in 1991. He was the only general secretary in the history of the Soviet Union to have been born during the Communist rule.

Gorbachev was born in Stavropol Krai into a peasant Ukrainian-Russian family, and in his teens operated combine harvesters on collective farms. He graduated from Moscow State University in 1955 with a degree in law. While he was at the university, he joined the Communist Party of the Soviet Union, and soon became very active within it. In 1970, he was appointed the First Party Secretary of the Stavropol Kraikom, First Secretary to the Supreme Soviet in 1974, and appointed a member of the Politburo in 1979. Within three years of the deaths of Soviet Leaders Leonid Brezhnev, Yuri Andropov, and Konstantin Chernenko, Gorbachev was elected General Secretary by the Politburo in 1985. Already before he reached the post, he had occasionally been mentioned in western newspapers as a likely next leader and a man of the younger generation at the top level.

Gorbachev's attempts at reform as well as summit conferences with United States President Ronald Reagan and his reorientation of Soviet strategic aims contributed to the end of the Cold War, ended the political supremacy of the Communist Party of the Soviet Union (CPSU), and led to the dissolution of the Soviet Union. For these efforts, he was awarded the Nobel Peace Prize in 1990 and the Harvey Prize in 1992 as well as Honorary Doctorates from Durham University in 1995, Trinity College in 2002 and University of Münster in 2005.

FULL ARTICLE AT WIKIPEDIA.ORG
This article is licensed under the GNU Free Documentation License.
It uses material from the Wikipedia article "Mikhail Gorbachev."