July 28 (UPI) -- Netflix is to release director Andy Serkis' film Mowgli via its streaming service and in theaters next year.

The motion-capture performance and live-action adaptation of Rudyard Kipling's classic story collection The Jungle Book is set in 19th-century India and stars Serkis as Baloo, Christian Bale as Bagheera, Cate Blanchett as Kaa, Benedict Cumberbatch as Shere Khan, Freida Pinto as Messua and Rohan Chand as the title character.

The Hollywood Reporter said Friday that Netflix picked up the distribution rights to the film from Warner Bros., which had intended to open it in theaters this October.

A Disney version of The Jungle Book, which mixed animation and live action, was released in 2016 to critical acclaim and became a blockbuster.

Serkis' film will stream on Netflix in 2D and in theaters in 3D.

"I'm really excited about Netflix for Mowgli," Serkis told Deadline. "Now, we avoid comparisons to the other movie and it's a relief not to have the pressure."

He added: "I've seen the 3D version, and it's exceptional, a different view from the 2D version, really lush and with great depth, and there will be some kind of theatrical component for that. What excites me most is the forward thinking at Netflix in how to present this, and the message of the movie. They understand this is a darker telling that doesn't fit it into a four quadrant slot. It's really not meant for young kids, though I think it's possible that 10 or above can watch it. It was always meant to be PG-13, and this allows us to go deeper, with darker themes, to be scary and frightening in moments. The violence between animals is not gratuitous, but it's definitely there. This way of going allows us to get the film out without compromise."

Kristen Stewart to star in 'Charlie's Angels' re-boot Millie Bobby Brown meets ancient creatures in 'Godzilla: King of the Monsters' trailer 'A Star is Born' to premiere at the Venice Film Festival Jennifer Connelly to co-star in 'Top Gun' sequel

Movies // 9 hours ago
What to binge: Horror movies for Halloween weekend
LOS ANGELES, Oct. 28 (UPI) -- Halloween is on Sunday, so you have all weekend to watch horror movies. Here are some recommendations for all the streaming services. 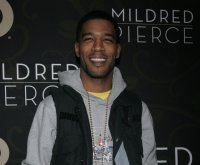 Movies // 2 days ago
Justine Bateman: 'Violet' is 'film I wish I'd seen at 19'
NEW YORK, Oct. 26 (UPI) -- Justine Bateman says she wrote and directed "Violet," about an accomplished female movie producer's crippling insecurity, because it is the kind of film she would have found inspiring when she was younger.
Advertisement