U.S. News // 1 week ago
Senate negotiators signal deal on infrastructure details
Senate Republicans working with the White House and Democrats on a bipartisan infrastructure bill said Wednesday they have a deal on all major issues and it is nearly ready to go to the floor.

U.S. News // 1 month ago
Texas Supreme Court: Store can't be sued for selling gun in church shooting
In a unanimous ruling, the state's highest civil court threw out multiple lawsuits against Academy Sports + Outdoors brought by survivors and families of victims of the 2017 mass shooting. 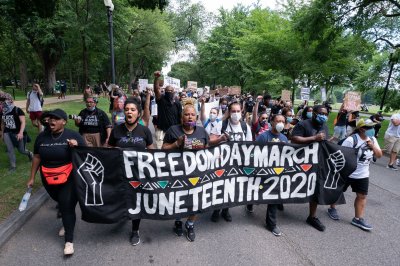 U.S. News // 6 months ago
Witness in El Paso Walmart shooting deported over traffic tickets
An undocumented woman who witnessed the 2019 mass shooting at a Walmart store and who was cooperating with law enforcement remains in Ciudad Juárez, Mexico, after she was deported because of unpaid traffic tickets.

U.S. News // 6 months ago
Senate votes to break filibuster on Mayorkas DHS nomination
The Senate voted 55-42 to break a Republican filibuster and advance the nomination of Alejandro Mayorkas, President Joe Biden's selection to lead the Department of Homeland Security.

U.S. News // 7 months ago
Bipartisan legislators introduce two-part $908B stimulus package
A group of 12 bipartisan senators introduced a stimulus bill totaling $908 billion that separates contentious provisions such as state and local funding and liability protections for employers from broader funding.

The acknowledgment that we can't completely cut off ourselves from domestic sources of oil and gas. That we need to explore nuclear power. That's certainly an important part of the overall picture

This is not an effort to scuttle or block the nomination, but a legitimate policy difference

This sale is a win-win, in strengthening the national security of our friend Taiwan as well as our own, and supporting tens of thousands of jobs in the U.S.

John Cornyn, III (born February 2, 1952) is the junior United States Senator for Texas, serving since 2003. He is a member of the Republican Party. He was elected Chairman of the National Republican Senatorial Committee for the 111th U.S. Congress.

Cornyn was born in Houston to John Cornyn, II and Atholene Gale Cornyn (née Danley). He graduated from Trinity University in 1973, where he majored in journalism and was a member of Chi Delta Tau. He earned a J.D. from St. Mary's University School of Law in 1977 and an LL.M. from the University of Virginia School of Law in 1995.

He served in San Antonio for six years as a district judge before being elected as a Republican in 1990 to the Texas Supreme Court, on which he served for seven years. From 1999-2002, Cornyn was the Texas Attorney General, the first of thus far only two Republicans to have held the position. In 2005, Cornyn's name was mentioned among possibilities to replace Supreme Court justices Sandra Day O'Connor or William Rehnquist.

FULL ARTICLE AT WIKIPEDIA.ORG
This article is licensed under the GNU Free Documentation License.
It uses material from the Wikipedia article "U.S. Sen. John Cornyn."
Back to Article
/