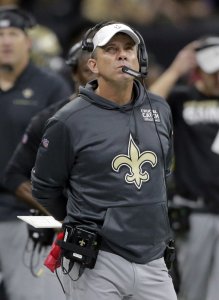 NFL // 4 months ago
Dolphins use defense to make history in MNF win vs. Saints
Nik Needham's early interception return for a touchdown and a team-record tying eight sacks sparked a dominant defensive performance, leading the Miami Dolphins to a 20-3 win over the New Orleans Saints in New Orleans.

We're going to look at his meniscus, his left knee, a little bit more

Joey is a guy that we've kept our eye on

We were hoping to keep (Thomas) alive, but it really came down to having to get another body in here

Patrick Sean Payton (born December 29, 1963 in San Mateo, California) is the head coach of the New Orleans Saints. He was the quarterbacks coach and later assistant head coach of the Dallas Cowboys until being hired by the Saints on January 17, 2006.

Payton was raised in Naperville, Illinois by parents Jeanne and Thomas Payton. He has an older brother, Tom, an older sister, Patrice and a younger sister, Molly. Sean attended Naperville Central High School in Naperville, IL, starting as quarterback his senior year before graduating in 1982. He then had a successful career playing quarterback at Eastern Illinois University, leading the Panthers to an 11–2 record and the quarter-finals of the Division I-AA Playoffs in 1986; while at EIU, he became a member of the Sigma Chi Fraternity.

FULL ARTICLE AT WIKIPEDIA.ORG
This article is licensed under the GNU Free Documentation License.
It uses material from the Wikipedia article "Sean Payton."