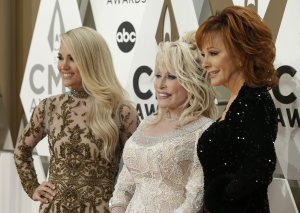 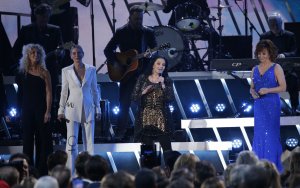 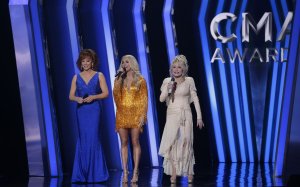 Music // 3 months ago
Beyonce, Billie Eilish to perform at the Oscars
Beyoncé, Billie Eilish and Finneas, Reba McEntire and Sebastián Yatra have been booked to perform this year's Best Song nominees at Sunday's 94th Oscars ceremony.

Entertainment News // 9 months ago
Reba McEntire rescued after staircase collapses in historic Oklahoma building
Singer and actress Reba McEntire said she is grateful she escaped unharmed when the staircase crumbled in an historic building she was touring.

She would ask me my opinion, and I'd always say, 'The best advice I can give you is go ask Narvel (Blackstock.)' So she did

I have respected Dolly, both professionally and personally, for my entire career

Women should feel terrific and confident about how they look each moment of their lives and the clothes that we wear play a huge role in evoking these feelings. I created 'Reba' to help women achieve this

Reba Nell McEntire (born March 28, 1955) is an American country music artist and actress. She began her career in the music industry singing with her siblings on local radio shows and at rodeos. As a solo act, she was invited to perform at a rodeo in Oklahoma City, which caught the attention of country artist Red Steagall. He brought her to Nashville, Tennessee, where she eventually signed a contract with Mercury Records in 1975. She released her first solo album in 1977 and released five additional studio albums under the label until 1983.

Signing with MCA Nashville Records, McEntire took creative control over her second MCA album, My Kind of Country (1984), which had a more traditional country sound and produced two number one singles: "How Blue" and "Somebody Should Leave". The album brought her breakthrough success, bringing her a series of successful albums and number one singles in the 1980s and 1990s. McEntire has since released 26 studio albums, acquired 35 #1 singles, and 28 albums have been certified Gold, Platinum or Multi-Platinum in sales by the Recording Industry Association of America.

In the early 1990s, McEntire branched into film starting with 1990's Tremors. She has since starred in the Broadway revival of Annie Get Your Gun and starred in her television sitcom, Reba (2001–2007) for which she was nominated for the Golden Globe Award for Best Performance by an Actress in a Television Series–Musical or Comedy. She has sometimes been referred to as "The Queen of Country", having sold 41 million records in the United States and more than 56 million worldwide. In the United States, she ranks as both the seventh best-selling female artist in all genres and the seventh best-selling country artist, and the second best-selling female country artist of all time, behind Shania Twain.

FULL ARTICLE AT WIKIPEDIA.ORG
This article is licensed under the GNU Free Documentation License.
It uses material from the Wikipedia article "Reba McEntire."