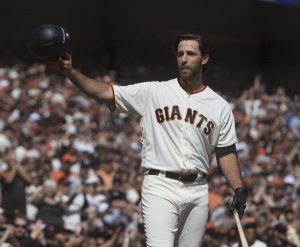 MLB // 2 weeks ago
Diamondbacks' Bumgarner ejected after stare-down, heated exchange with umpire
Arizona Diamondbacks pitcher Madison Bumgarner was restrained and eventually ejected for arguing with an umpire after he pitched one inning in an 8-7 win over the Miami Marlins on Wednesday in Miami.

MLB // 1 year ago
New addition Albert Pujols helps Dodgers beat Diamondbacks
Future Hall of Famer Albert Pujols made an impact in his debut with the Los Angeles Dodgers. The veteran first baseman went 1 for 4 with an RBI in a 3-1 win over the Arizona Diamondbacks.

MLB // 2 years ago
Giants' Kevin Pillar beats Cardinals with 440-foot bomb
Kevin Pillar pelted an 0-1 fastball over the left center field fence at Busch Stadium to lead the San Francisco Giants to a dramatic victory against the St. Louis Cardinals.

Madison Bumgarner (born August 1, 1989) is an American baseball pitcher with the San Francisco Giants of Major League Baseball. Bumgarner is listed 6'5" (1.93m) and 225 pounds (97 kg) and has a 90–95 MPH fastball. He was drafted by the San Francisco Giants in the 1st round (10th overall) in the 2007 Major League Baseball Draft.

Bumgarner was drafted from South Caldwell High School in Hudson, North Carolina where he led his team to a 4A State Championship in 2007. He committed to play for the University of North Carolina but decided to enter the 2007 Major League Baseball Draft. Bumgarner was selected tenth overall by the Giants. Going into the draft, Baseball America had ranked him as the fourteenth best prospect overall. He was the first high school pitcher to be selected by the Giants with their first pick since Matt Cain in 2002, the first left-handed pitcher selected in the first round by the organization since Noah Lowry in 2001, the first left-handed pitcher taken as the first pick by the organization since Mike Remlinger in 1987, and the first high-school left-hander the Giants drafted in the first round since Frank Riccelli in 1971.

In 2008, Baseball America ranked him the third best prospect in the Giants organization.

FULL ARTICLE AT WIKIPEDIA.ORG
This article is licensed under the GNU Free Documentation License.
It uses material from the Wikipedia article "Madison Bumgarner."