Arizona Diamondbacks starting pitcher Madison Bumgarner was ejected between the first and second inning of a game against the Miami Marlins on Wednesday in Miami. File Photo by Bill Greenblatt/UPI | License Photo

MIAMI, May 4 (UPI) -- Arizona Diamondbacks pitcher Madison Bumgarner was restrained and eventually ejected for arguing with an umpire after he pitched one inning in an 8-7 win over the Miami Marlins on Wednesday in Miami.

"I don't know if I can say anything that will make the situation better," Bumgarner told reporters at loanDeport park. "What I can say is I am extremely proud of our team coming back to win, because I put us in a hole there."

The sequence occurred when first base umpire Dan Bellino performed a hand check on Bumgarner between the first and second innings. Bumgarner said he was cleared during the standard foreign substance check.

Marlins third baseman Jon Berti hit a 385-foot home run to left field to lead off the bottom of the first. Bumgarner went on to retire the next three hitters.

Bellino then checked Bumgarner's left pitching hand while he was on his way off the field. Another umpire checked the hand of Marlins starter Elieser Hernandez, per MLB protocol.

Bumgarner and the Bellino then exchanged words, with their faces just inches apart. Diamondbacks manager Torey Lovullo and Bumgarner's teammates stepped in between the argument.

Bumgarner then became more animated and attempted to fight through those holding him back to get the Bellino.

He was then ejected and replaced by relief pitcher Corbin Martin.

"I got both sides of [the argument], and obviously I'm going to believe my player," Luvollo said of the exchange.

The Marlins scored two more runs in the bottom of the second.

Diamondbacks third baseman Sergio Alcantara cut the deficit to one run with a two-run triple in the top of the fourth. Shortstop Geraldo Perdomo tied the score with an RBI single in the next at-bat.

Center fielder Daulton Varsho followed with a 416-foot, two-run homer for the final scores of the Diamondbacks' five-run inning.

The Diamondbacks took a 5-3 lead into the top of the fifth.

Alcantara smacked an RBI single to right field in the sixth for another Diamondbacks run.

Berti returned to the plate and led off the bottom of the seventh with a 380-foot solo homer for the Marlins. Marlins first baseman Jesus Aguilar also homered two pitches later to cut the deficit to one run.

The Marlins went on to tie the score when center fielder Bryan De La Cruz raked an RBI single through the infield in the bottom of the eighth.

Marlins second baseman Jazz Chisholm Jr. provided a go-ahead run when he scored from third on a wild pitch during the next at-bat.

But the Diamondbacks snatched back momentum in the top of the ninth. Varsho hit a single to left in the second at-bat of the frame. Smith followed with his deep shot to right, just inside the foul pole.

Bumgarner threw seven of his 13 pitches for strikes. He allowed one hit, one run and did not issue a walk. 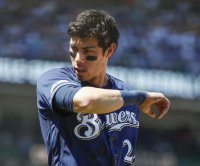