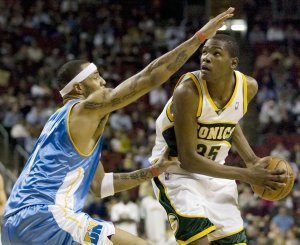 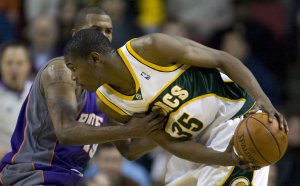 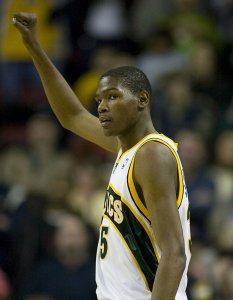 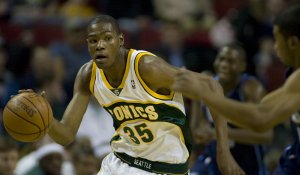 NBA // 2 months ago
Lakers' LeBron James sets record with 16th All-NBA selection
Los Angeles Lakers superstar LeBron James made history Wednesday when he was named to an All-NBA team for the 16th time in his 17-year NBA career. 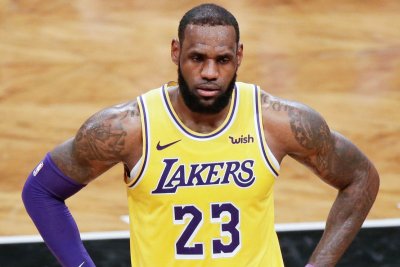 It was excruciating pain and it was hurting a lot

Kevin Wayne Durant (born September 29, 1988) is an American professional basketball player for the Oklahoma City Thunder of the National Basketball Association (NBA). A 6'9" small forward/shooting guard who is also capable of playing power forward, Durant was the consensus 2007 National College Player of the Year and the 2006–2007 Big 12 Player of the Year, amongst other awards. After a standout freshman season at the University of Texas, Durant opted to enter the NBA Draft, where he was selected second overall by the Seattle SuperSonics. There he went on to win the NBA Rookie of the Year Award after his debut season. In 2007, Durant signed an endorsement contract with Nike. In the 2009–10 season Durant led the NBA in scoring and became the youngest player ever to win the NBA scoring title. He would later be named to the 2010 All NBA First Team.

A basketball player from his earliest days, Durant played for a successful Amateur Athletic Union (AAU) youth basketball team, the PG Jaguars. The Jaguars won multiple national championships with Durant and fellow future blue chip recruits Michael Beasley (Timberwolves) and Chris Braswell (UNC-Charlotte). Durant wore, and continues to wear, the #35 jersey in honor of his childhood mentor and AAU coach, Charles Craig, who was murdered at age 35. Durant later moved on to play AAU basketball with fellow McDonald's All American Ty Lawson (Denver Nuggets) for the DC Blue Devils. After spending two years at National Christian Academy, and one year at Oak Hill Academy, Durant grew five inches and was 6'7" when he started at Montrose Christian School in Rockville, Maryland for his senior year, during which he grew two more inches. At Montrose, Durant led the team in scoring and steals and was named the Washington Post All Met Basketball Player of the Year. Durant also played with current Memphis Grizzlies point guard Greivis Vasquez while at Montrose. Vetter described Durant as a hard working player, complete with size, and incredible skills in shooting, ball handling, defense, and even some post up moves. Durant also was named a McDonald's All American and named co-MVP of the 2006 McDonald's All American game along with Chase Budinger. Behind Greg Oden, Durant was widely regarded as the second-best high school prospect.

A 6'9" swingman with a 7'5" wingspan, Durant was one of four freshman starters for the University of Texas basketball team. Durant started in all 35 games of the season, which culminated with a loss in the second round of the NCAA tournament to the University of Southern California. Texas finished third in the conference with a 12–4 record and was the runner-up in the 2007 Big 12 Men's Basketball Tournament.

FULL ARTICLE AT WIKIPEDIA.ORG
This article is licensed under the GNU Free Documentation License.
It uses material from the Wikipedia article "Kevin Durant."
Back to Article
/