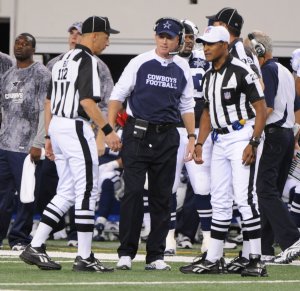 NFL // 6 months ago
Cowboys miss playoffs despite big win over Redskins
The Dallas Cowboys dismantled the Washington Redskins in a season-ending victory, but the effort was not enough to secure a spot in the NFC playoffs.

NFL // 9 months ago
Sam Darnold returns, leads Jets to upset of Cowboys
Sam Darnold made his return from mononucleosis and led the New York Jets to an upset of the Dallas Cowboys, passing for more than 300 yards and multiple scores in Week 6.

NFL // 9 months ago
Cowboys overwhelm upset-minded Dolphins with second half barrage
The Miami Dolphins were huge underdogs entering their Week 3 matchup against the Dallas Cowboys. Miami showed fight in the first half before being overwhelmed down the stretch.

Jason Calvin Garrett (born March 28, 1966 in Abington, Pennsylvania) is an American former National Football League player and the current head coach of the Dallas Cowboys. Garrett had been the offensive coordinator of the Cowboys before being promoted to his current position after the Cowboys fired coach Wade Phillips on November 8, 2010.

FULL ARTICLE AT WIKIPEDIA.ORG
This article is licensed under the GNU Free Documentation License.
It uses material from the Wikipedia article "Jason Garrett."
Back to Article
/