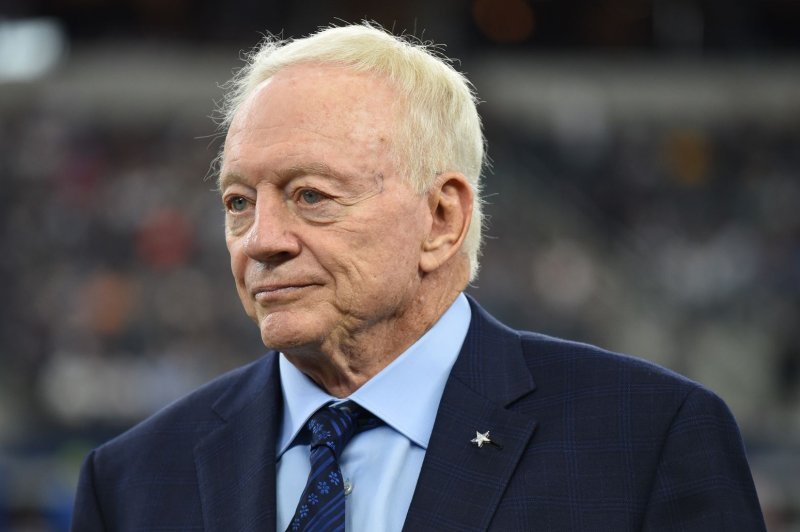 Dallas Cowboys running back Ezekiel Elliott (21) has been responsible for five of the team's lead-leading 15 turnovers. File Photo by Ian Halperin/UPI | License Photo

Oct. 21 (UPI) -- Dallas Cowboys owner Jerry Jones said the team's membership in the struggling NFC East is a gift from heaven, but he wants to see better play to have a season that "makes sense" based on their latest tribulations.

"I'm not in a feel-good mood, frankly, that we've got manna from heaven being in the NFC East," Jones said Tuesday on 105.3 The Fan in Dallas. "These things have a way of evening out as you go along. Certainly, the NFC East is having its challenges now."

The Cowboys (2-4) remain in first place in the NFC East, just ahead of the Philadelphia Eagles (1-4-1), New York Giants (1-5) and the Washington Football Team (1-5). Dallas clings to the top spot in the division two weeks after the team lost starting quarterback Dak Prescott to a season-ending ankle injury.

Andy Dalton started in place of Prescott for the Cowboys' 38-10 loss to the Arizona Cardinals in Week 6 on Monday Night Football.

"When you're not playing better than we are, it's hard for me to basically look at the end game, which is win the NFC East, and get excited that we're better," Jones said. "[That] we may be slow, but we're ahead of you' syndrome.

"We've got to get better to have the kind of season that makes sense for us."

The Cowboys could slip to the bottom of their division by early November. Dallas faces Washington on Sunday and the Philadelphia on Nov. 1. Both of those divisional matchups are on the road.

The Cowboys are the only team in the NFL that leads their division and has a record below .500.

Dallas has a minus-12 turnover ratio, the worst in the NFL. The Cowboys' 15 turnovers are a league high. They have allowed at least 34 points in each of their last five games.

Jones' team entered the season with Super Bowl aspirations and averaged 10 wins per season from 2016 through 2019. The Cowboys fired former coach Jason Garrett in January after an 8-8 campaign and then hired former Green Bay Packers coach Mike McCarthy.

Jones said he still believes McCarthy is still capable of coaching a team to the Super Bowl based on his experience, and he isn't "concerned" about his ability to address the Cowboys issues.

"I think we don't have the talent we had planned on," Jones said. "We have [enough] talent that if we don't have early setbacks, we will win ball games."

The Cowboys will face Washington at 1 p.m. EDT on Sunday at FedEx Field in Landover, Md.