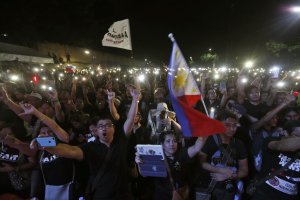 World News // 2 weeks ago
Three dead in shooting before law school graduation in Philippines
Three people were slain, including a former mayor, before a law school graduation Sunday in Quezon City in metro Manila, the capital of the Phillipines, in what authorities said may be a targeted shooting.

World News // 2 months ago
Philippines' Duterte calls for drug war to continue after he leaves office
As his single six-year term comes to an end, Philippine President Rodrigo Duterte called for the continuation of his bloody war on drugs and urged the country to rally around his successor, Ferdinand Marcos Jr.

World News // 3 months ago
Marcos victory opens old wounds for martial law victims in Philippines
As Ferdinand "Bongbong" Marcos Jr. closed in on the presidency of the Philippines earlier this week, victims of his dictator father recalled their years of torture and detention under martial law.

World News // 3 months ago
Marcos clan returns to power in the Philippines with landslide presidential victory
Thirty-six years after his dictator father was ousted, Ferdinand Marcos Jr. is poised to become the next president of the Philippines in a stunning return to power for the infamous political dynasty.

World News // 3 months ago
Son of dictator Marcos has big lead in Philippine presidential vote count
Ferdinand Marcos Jr., the 64-year-old son and namesake of the infamous dictator, appeared headed to the country's presidency on Monday evening with an enormous lead over challenger Leni Robredo in an unofficial tally.

World News // 3 months ago
Leni Robredo looking for a people-powered Philippine election upset
On the eve of the Philippine presidential election, supporters of candidate Leni Robredo are hoping she will be able to pull off an upset victory driven by a "pink wave" grassroots movement.

World News // 3 months ago
Ferdinand Marcos Jr. favored to win pivotal Philippines election
On Monday, the Philippines' 67.5 million registered voters will head to the polls to choose the successor to strongman President Rodrigo Duterte, with the son of dictator Ferdinand Marcos the heavy favorite to win.

As Philippine president and strongman, his greatest achievement was in the fields of infrastructure development and international diplomacy. However, his administration was marred by massive authoritarian corruption, despotism, nepotism, political repression, and human rights violations. He benefited from a large personality cult in the Philippines during his regime.

In 1983, his government was implicated in the assassination of his primary political opponent, Benigno Aquino, Jr. The implication caused a chain of events, including a tainted presidential election that served as the catalyst for the People Power Revolution in February 1986 that led to his removal from power and eventual exile in Hawaii. It was later alleged that he and his wife Imelda Marcos had moved billions of dollars of embezzled public funds to the United States, Switzerland, and other countries, as well as into alleged corporations during his 20 years in power.

FULL ARTICLE AT WIKIPEDIA.ORG
This article is licensed under the GNU Free Documentation License.
It uses material from the Wikipedia article "Ferdinand Marcos."