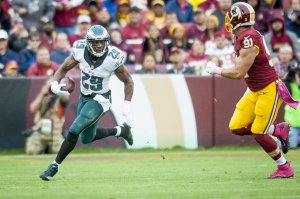 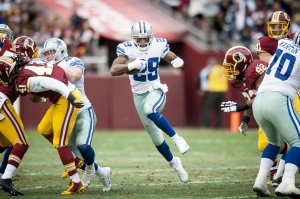 NFL // 3 years ago
Titans' Lewis: Patriots 'didn't think I was good enough to be there'
Dion Lewis is looking to make noise in Music City while playing for the Tennessee Titans, but the running back appeared to be left with a sour tune after departing from the New England Patriots.

NFL // 4 years ago
Titans RB Henry expected to start over Lewis
After the Tennessee Titans cut running back DeMarco Murray in March, they signed Dion Lewis and it was assumed that he would be the starter.

NFL // 4 years ago
Murray: Future bright for Titans' Henry, Mariota
DeMarco Murray was quite complimentary of both fellow running back Derrick Henry and quarterback Marcus Mariota when asked about their respective futures with the Tennessee Titans.

NFL // 4 years ago
Free-agent RB DeMarco Murray hoping to join a team soon
Free-agent running back DeMarco Murray said he had conversations with a handful of teams and would like to join one of them before training camp begins.

DeMarco Murray (born February 12, 1988) is an American football running back for the Dallas Cowboys and played college football for the Oklahoma Sooners.

DeMarco Murray was coached by David White at Bishop Gorman High School in Las Vegas, Nevada, where he was an all-conference pick three consecutive years. At Gorman, he was a teammate of fellow OU Sooner Ryan Reynolds and current University of Arizona running back Keola Antolin. During his time at Grandview, his team was 3-time Conference Champions. As a senior in 2005, he rushed for 1,947 yards and 27 touchdowns and also caught 22 passes for 624 yards and 7 touchdowns, earning him all-state honors and the 2005 Sunset Region Offensive Player of the Year award. Murray played in the 2005 U.S. Army All-American Bowl.

Considered one of the top running backs of his class alongside Chris Wells, C. J. Spiller and Michael Goodson, Murray drew offers from Miami (Fl.), Penn State and Texas A&M among others. He chose Oklahoma over Southern California at the U.S. Army All-American Bowl.

FULL ARTICLE AT WIKIPEDIA.ORG
This article is licensed under the GNU Free Documentation License.
It uses material from the Wikipedia article "DeMarco Murray."