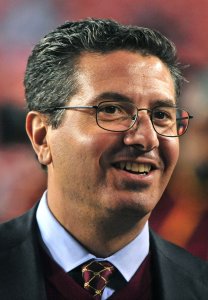 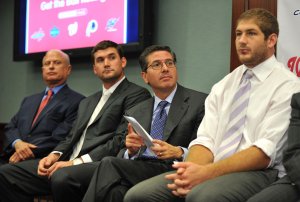 NFL // 1 year ago
Washington owner Dan Snyder vows for new culture amid team's sex harassment allegations
Dan Snyder, owner of Washington's NFL team, said Friday that behavior described in a report, that cited allegations of sexual harassment from team executives against female employees "has no place" in the franchise.

NFL // 1 year ago
Former Redskins OL coach, 'Hogs' architect Joe Bugel dies at 80
Former Washington Redskins coach Joe Bugel, who was the architect of the famed "Hogs" offensive line in the 1980s, has died. He was 80.

NFL // 1 year ago
Redskins retire Bobby Mitchell's number, remove ex-owner's name from seating level
The Washington Redskins are retiring the number worn by the late Bobby Mitchell and renaming the lower level of the team's FedEx Field in his honor.

We knew of Jim's stellar offensive reputation, so we hired him as coordinator, but we also suspected he would be a strong candidate for head coach

Anyone who knew him was touched by his smile, joy for life and love of his family

Daniel M. Snyder (born November 23, 1965 in Silver Spring, Maryland) is the current owner of the Washington Redskins American football team, owner of the Dick Clark Productions television production company, and primary investor in Red Zebra Broadcasting, which is home to the Redskins Radio Network. Snyder has a net worth of $1.05 billion.[1] The Redskins have experienced just three winning seasons during the tenure of his presidency, while undergoing numerous coaching and quarterback changes.

FULL ARTICLE AT WIKIPEDIA.ORG
This article is licensed under the GNU Free Documentation License.
It uses material from the Wikipedia article "Dan Snyder."