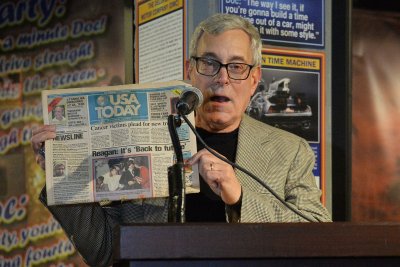 Movies // 2 months ago
'Back to the Future' creator, stars celebrate museum exhibit
The Hollywood Museum unveiled "Back to the Future: The Exhibit" with screenwriter Bob Gale and cast members Charles Fleischer, Darlene Vogel, Ricky Dean Logan, Donal Fullilove and Elsa Raven in attendance.

TV // 1 year ago
'American Gods' Season 2 trailer: Shadow is offered a role in impending war
Starz has released a new 2-minute trailer for the second season of its supernatural drama "American Gods."

TV // 2 years ago
Starz renews 'American Gods' for a second season
Starz is bringing its fantasy drama "American Gods" back for Season 2.

Top News // 2 years ago
The Almanac
On April 20, 1961, Radio Havana announced that seven members of the group involved in the Bay of Pigs invasion against the Castro government had been executed.

Crispin Hellion Glover (born April 20, 1964) is an American film actor, director and screenwriter, avant-garde musician and self-published author. Glover is known for portraying eccentric people on screen such as George McFly in Back to the Future, Layne in River's Edge, unfriendly recluse Rubin Farr in Rubin and Ed, the "Creepy Thin Man" in the big screen adaptation of Charlie's Angels, Willard Stiles in Willard, schizophrenic killer Stanley in Simon Says, among others. In the early 2000s Glover started his own production company, Volcanic Eruptions, which issues his books and also serves as the production company of Glover's films, What Is It? and It is Fine. Everything is Fine!. Glover tours with those films and plans on filming more at the property he owns in the Czech Republic.

Glover was born an only child in New York City, and moved to Los Angeles with his family at the age of five. He was named after the Saint Crispin's Day speech from William Shakespeare's play Henry V, which his parents enjoyed. "Hellion", his real middle name, had earlier been used as a false middle name by his father, who did not like his own real middle name, Herbert. His father is actor Bruce Glover and his mother, Mary Elizabeth Lillian Betty Krachey Bloom (née Koerber), was an actress and dancer who retired upon his birth. As a child, Glover attended The Mirman School for the academically gifted. He then attended both Venice High and Beverly Hills High School and graduated in 1982.

Glover began acting professionally at the age of 13. He appeared in several sitcoms as a teenager, including Happy Days and Family Ties. His first film role was in 1983's My Tutor. That led to roles in Teachers (1984) and Friday the 13th: The Final Chapter (1984). He then worked with director Trent Harris on the third chapter of the Beaver Trilogy, entitled The Orkly Kid. In this short film, he portrayed a small town man who organizes a local talent show to showcase his obsession with Olivia Newton-John, much to the embarrassment of the local community. At the climax of the film, Glover does his rendition, in full drag, of Olivia Newton-John's "Please Don't Keep Me Waiting" from her 1979 album Totally Hot.

FULL ARTICLE AT WIKIPEDIA.ORG
This article is licensed under the GNU Free Documentation License.
It uses material from the Wikipedia article "Crispin Glover."
Back to Article
/