"He is so conceited. He's such a wanker. I understand, yeah, sure, fine, but it would be difficult to name any other force on the planet that has positively affected the lives of more people in a more substantial way than technology," Langley told UPI in a recent phone interview.

"He's helped the world more than anyone else and nobody likes him. It's weird."

Langley pointed out how many people are coping with the coronavirus pandemic because technology enables them to work, access information, stay in touch with family and friends, enjoy TV, films and online videos and order essentials to be delivered to their homes.

"Where would we be without all of this?" he said. "It's really easy to just look at the pain and the toxicity and the rest of the stuff that does, indeed, come with technology, but it is overwhelmingly a force for good."

The series is based on author Neil Gaiman's fantasy novel about a clash between old and new idols of worship in the contemporary United States.

Langley said he is grateful to be part of an entertaining action-drama that asks big questions about values, faith and humanity.

On the show, gods grow or wane in power depending on what people believe in or prize.

Langley said this season will resonate with viewers who have been reflecting on their own beliefs during the pandemic.

In comparing the book to the TV series, Langley said the novel was like a house with a lot of interesting-looking but closed doors. The show offers the opportunity to peek inside those secret rooms.

"We already know we're going to Lakeside," he teased about the upcoming episodes, which will take place in a new location.

"That was one of my favorite bits to read. Some big events from the book get covered this time around -- 'you can't put the genie back in the bottle'-kind of events," he added. "I'm really excited for people to see those because they are big and they change the lay of the land for the show going forward."

All of the main characters will also have arcs independent of the overarching storyline this season.

"They will be integrated later, but they have very personal journeys of working out who they are," Langley said.

The biggest challenge of acting in the series for him is responding to intensity for long periods of time.

Leading up to a new season and between shooting days, the actor keeps his character on a "low simmer," instead of completely distancing himself from his American Gods alter-ego.

"The character is there and it bleeds over. I'll happily do it. It's my job and I bloody love it, but there is always a month or two after I finish where I have to let the character sort of bleed back out of me," he said.

One of his favorite parts about the role is it requires him to work with Yetide Badaki, who plays the old goddess of love, Bilquis. The pair share the screen in the Season 3 premiere.

"Bilquis and Tech Boy should never be in the same room. They really shouldn't," Langley said.

"They are chalk and cheese. They absolutely shouldn't be anywhere near each other, but they frequently are and I love it. It's such an abrasive, tense relationship and it's wonderful," he added. "The dance between those two characters this season gets turned up to 11 and that gets examined in a lot more detail."

Badaki didn't want to give away too many details in a separate chat with UPI, but she said Bilquis and Technical Boy would find "unexpected common ground" this season after they were previously shown as "opposite sides of a spectrum."

In addition to "diving further into the depths of what makes Bilquis Bilquis" this season, Badaki also was eager for the show to introduce the Orisha spirit characters to audiences.

"I am Nigerian. They originated in my part of the world and this was a pantheon I had hoped to see in the American Gods world. It was a joy to see them brought to life," the actress said. "It's just incredible and I can't wait for everybody else to see it, as well."

Like Langley, Badaki is excited to take her character on a journey of self-discovery in Season 3.

More than ever before, Bilquis will tap into her power as a goddess and defy definition as a woman.

"We are not the labels that some want to put on us or the expectations others have for us. We have universes within us," Badaki said. "I'm excited for people to see Bilquis have soft moments."

The actress described Season 3 as "prescient."

Although it was filmed just before lockdowns and social distancing were implemented, people living through the pandemic will surely find plenty that is familiar in the new episodes.

"In 2020, we were all dealing with these moments of isolation," Badaki said, noting several characters mirror this in their own stories.

These people will do some soul-searching this season and figure out how to improve themselves for the good of others.

"It shines a spotlight on the idea of 'I as we' and I think we understand that so much more now," Badaki said. 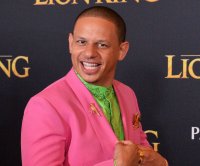 TV // 9 hours ago
'Walker' prequel 'Independence' in the works at The CW
Dec. 8 (UPI) -- "Walker: Independence," a new series executive produced by Jared Padalecki, is in development at The CW.

TV // 13 hours ago
Chloë Grace Moretz says a third 'Kick-Ass' would 'have to be kind of perfect'
Dec. 8 (UPI) -- Chloë Grace Moretz discussed the possibility of making a third "Kick-Ass" movie while appearing on "The Tonight Show Starring Jimmy Fallon."

TV // 16 hours ago
WWE NXT: Johnny Gargano gives heartfelt message, Grayson Waller attacks
Dec. 8 (UPI) -- Johnny Gargano addressed NXT fans in what might might have been his final appearance on the brand he helped build on WWE "NXT."
Advertisement