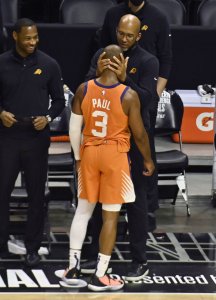 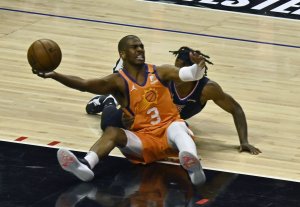 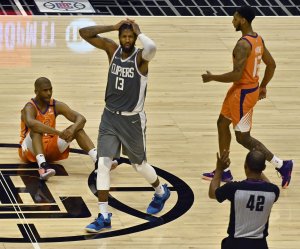 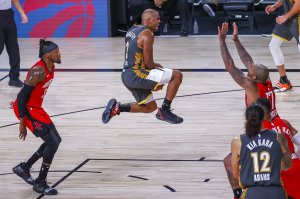 NBA // 2 months ago
Mavericks stun Suns with 33-point blowout, advance to conference finals
All-NBA guard Luka Doncic scored a game-high 35 points and the Dallas Mavericks led by as many as 46 in a blowout of the Phoenix Suns in Game 7 of the Western Conference semifinals.

NBA // 2 months ago
Fan ejected for incident with Chris Paul's family during Mavericks-Suns playoff game
A Dallas Mavericks fan was ejected for an incident that involved the family of Phoenix Suns star Chris Paul in the stands during Game 4 of the Western Conference semifinals, the Mavericks said.

NBA // 3 months ago
NBA playoffs: Booker, Paul pace Suns in blowout of Mavericks
Devin Booker scored 21 of his team-high 30 points in the second half to lead the Phoenix Suns to a blowout win over the Dallas Mavericks in Game 2 of the Western Conference semifinal series.

NBA // 3 months ago
NBA playoffs: Ayton, Booker guide Suns past Doncic, Mavericks in Game 1
Devin Booker got off to a stellar start, while Deandre Ayton dominated in the paint to lead the Phoenix Suns to a win over the Dallas Mavericks in Game 1 of their second-round Western Conference playoff series.

NBA // 3 months ago
NBA playoffs: Chris Paul doesn't miss, leads Suns to series win over Pelicans
Veteran guard Chris Paul made 14 of 14 shot attempts for a game-high 33 points to lead the Phoenix Suns to a series-clinching Game 6 win over the New Orleans Pelicans in the first round of the NBA playoffs.

NBA // 3 months ago
NBA playoffs: Chris Paul leads Suns past Pelicans in Game 1
Veteran guard Chris Paul scored 19 of his game-high 30 points in the fourth quarter to lead the Phoenix Suns to a 110-99 win over the New Orleans Pelicans in Game 1 of their first-round playoff series in Phoenix.

This was the most difficult decision I have ever made

Paul was born and raised in North Carolina. Despite only playing two varsity basketball seasons in high school, he was a McDonald's All-American and accepted a scholarship with nearby Wake Forest University. After his sophomore year with the Demon Deacons, he declared for the draft. Since being selected 4th overall in the 2005 NBA Draft by New Orleans, Paul has been a NBA Rookie of the Year (2006), a four-time All-Star, and an All-NBA and All-Defensive team honoree. He led the Hornets to the second round of the 2008 NBA Playoffs. He has also won an Olympic Gold Medal with the United States national basketball team.

Off the court, Paul is a notable ten-pin bowler and a sponsored spokesperson for the United States Bowling Congress (USBC). He has participated in numerous celebrity and youth bowling events as the head of the CP3 Foundation to benefit programs in Louisiana after Hurricane Katrina, and charities in Winston-Salem.

FULL ARTICLE AT WIKIPEDIA.ORG
This article is licensed under the GNU Free Documentation License.
It uses material from the Wikipedia article "Chris Paul."