Top News // 4 months ago
The Almanac
On Oct. 31, 2014, SpaceShipTwo, Virgin Galactic's effort in spaceflight for tourists, crashed during a test flight, killing one of the pilots. 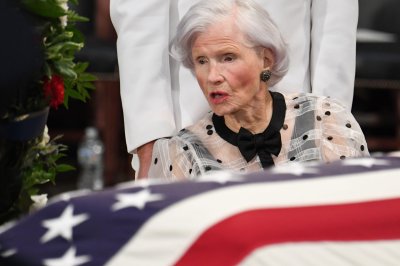 World News // 1 year ago
South Korea Jeju Massacre haunts the memories of survivors
Ko Wan-soon was only 9 when an anti-communist South Korean "soldier" smashed the skull of her 3-year-old brother with a club.

Top News // 2 years ago
The Almanac
On Jan. 21, 2009, Sen. Hillary Clinton, D-N.Y., won near-unanimous Senate confirmation as U.S. secretary of state. She took the oath of office later that day.

Top News // 3 years ago
The Almanac
On Jan. 21, 2003, the U.S. Census Bureau said Hispanics had moved past African Americans as the largest minority group in the United States.

Voices // 3 years ago
A visit to Pyongyang: the Kim dynasty's homage to Stalinism
On a tour of Pyongyang, North Korea, everything and everyone we saw was part of a managed performance: people on the street, shopping, even children playing.

Top News // 4 years ago
The Almanac
On Jan. 21, 1924, Vladimir Lenin, architect of the Bolshevik Revolution and the first leader of the Soviet Union, died of a brain hemorrhage at the age of 54.

Chiang Kai-shek (October 31, 1887 – April 5, 1975) was a political and military leader of 20th century China. He is known as Jiǎng Jièshí or Jiǎng Zhōngzhèng in Mandarin.

Chiang was an influential member of the Nationalist Party, the Kuomintang (KMT), and was a close ally of Sun Yat-sen. He became the Commandant of the Kuomintang's Whampoa Military Academy, and took Sun's place as leader of the KMT when Sun died in 1925. In 1926, Chiang led the Northern Expedition to unify the country, becoming China's nominal leader. He served as Chairman of the National Military Council of the Nationalist government of the Republic of China (ROC) from 1928 to 1948. Chiang led China in the Second Sino-Japanese War, during which the Nationalist government's power severely weakened, but his prominence grew. Unlike Sun Yat-sen, Chiang Kai-shek was socially conservative, promoting traditional Chinese culture in the New Life Movement and rejected western democracy and the democratic socialism that Sun Yet-sen and other left-wing members of the KMT embraced in favor of an authoritarian nationalist government.

Although Chiang's predecessor, Sun Yat-sen, was well-liked and respected by the communists, under Chiang's leadership the Nationalists soon engaged in a longstanding civil war with the Chinese Communist Party (CCP). Even after the Japanese invaded China, Chiang ignored this military threat to concentrate on a controversial campaign of systematic eradication of his political opponents—namely the communists. It was only with U.S. intervention that Chiang was forced to address the problem of the Japanese invasion and cooperate with the communists to drive the Japanese out. After the Japanese surrender in 1945, Chiang once again became embroiled in a bloody civil war with the Communist Party of China. Ultimately, with support from the Soviet Union and popular support from the largely rural Chinese population, the CCP defeated the Nationalists, forcing the Nationalist government to retreat to Taiwan, where martial law was imposed during a period known as the White Terror, and from where the government continued to declare its intention to take back mainland China. Chiang ruled the island securely as the self-appointed President of the Republic of China and Director-General of the Kuomintang until his death in 1975.

FULL ARTICLE AT WIKIPEDIA.ORG
This article is licensed under the GNU Free Documentation License.
It uses material from the Wikipedia article "Chiang Kai-shek."
Back to Article
/