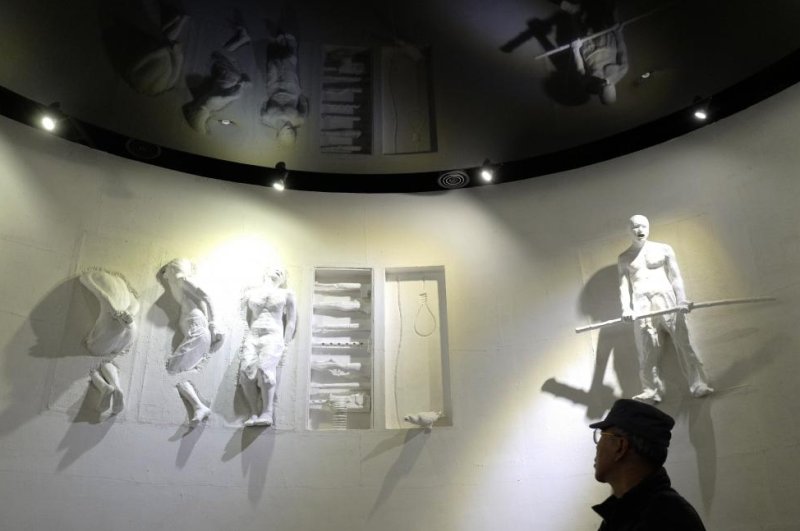 The 4.3 Peace Park on Jeju Island, South Korea includes exhibits of how victims were tortured or killed during a massacre that has been kept hushed-up for decades in the country. File Photo by Jeon Heon-kyun/EPA-EFE

UNITED NATIONS, June 20 (UPI) -- Ko Wan-soon was only 9 when an anti-communist South Korean "soldier" smashed the skull of her 3-year-old brother with a club, as anti-communist forces terrorized their village and executed civilians.

Ko, an "80-year-old grandmother," is a witness and survivor of one of the most brutal massacres in South Korean history. At the U.N. Symposium on Human Rights and Jeju 4.3 on Thursday, she called for awareness of the Jeju Massacre, or Jeju Uprising, when tens of thousands of victims may have been killed in the South while detained or tortured at the hands of anti-communist police from 1948 to 1954.

In an emotional testimony before diplomats and civic activists, Ko broke down in tears several times, as she recalled the day anti-communist forces literally tore into her house.

"The sparkling blade of a knife pierced through the door," Ko said.

Outside, soldiers had set houses on fire, forcing out families, including Ko's, who were rounded up to a nearby school to be executed by rifle.

When Ko, her mother and brother were darting around school grounds to dodge hails of bullets, a soldier singled out her brother for what would prove to be a fatal beating.

"He lost consciousness, drooping down my mother's back," she said. "In the end, without being able to receive proper medical treatment at a hospital, he died in March 1951, after years of suffering from fluid collecting in his head."

Ko's testimony of an incident known as the Bukchon Massacre of Jan. 17, 1949, is only one example of the experiences of countless victims, many of them women, children, or the elderly, targeted for the actions of armed guerrillas, who were active on Jeju Island following liberation on Aug. 15, 1945.

The bloodshed Ko witnessed was one of many incidents that began on April 3, 1948, when South Korean military police fired at demonstrators after Jeju residents refused to vote in a U.N.-backed election. The violence began when armed guerrillas attacked police boxes.

According to the Jeju 4.3 Peace Foundation, rebel fighters who supported communism were responsible for about 10 percent of all deaths. Anti-communist paramilitary forces who retaliated carried out the majority of the killings.

Bruce Cumings, the influential U.S. historian of Korea at the University of Chicago, said at the symposium the killings were undertaken by young men who had been kicked out of northern Korea by communists. Some of them formed the Northwest Youth League in the South and began to embark "on a campaign of terror in order to defeat communism" on Jeju Island, Cumings said.

Cumings, who once dubbed the massacre "our Srebrenica" in a book on the 1950-53 Korean War, said the U.S. military, which maintained operational control of the South's military and national police after Japan's surrender, had a role in the suppression during the massacre.

"But the United States is seen as a kind of innocent bystander" to what took place, the historian said.

U.S. officials instead praised first South Korean President Syngman Rhee's "vigorous" anti-communism in the documents, favoring his hard-line policies over those of Chiang Kai-shek, the leader of the Republic of China.

"It made me ashamed," he said.

Cumings' call for U.S. accountability has received support from South Korean civic groups, including the Jeju 4.3 Peace Foundation, which has worked to raise awareness of the massacre through dialogue.

Yang Jo-hoon, chairman of the foundation, said Thursday the United States' and past authoritarian South Korean governments' responsibility are significant.

"We seek truth and justice, for a true reconciliation," he said.

In 2003, South Korea's National Committee for the Investigation of the Truth concluded the U.S. army military government and the Korean military shared responsibility for the incident.

World News // 3 hours ago
Quote from Beijing official on '5 years' of COVID-19 restrictions causes stir
June 27 (UPI) -- Residents of Beijing reacted with confusion and alarm Monday when a top Communist Party official was quoted in official media saying strict COVID-19 policies could be in place for five years.

World News // 8 hours ago
WNBA's Brittany Griner appears briefly in Russian court
June 27 (UPI) -- WNBA star Brittney Griner appeared briefly during a closed-door preliminary hearing with a new appearance set for July 1 but no other movement in her case since being initially detained on Feb. 17.

World News // 6 hours ago
Ancient Israeli mosaic returns home after years touring the world
June 27 (UPI) -- An ancient mosaic discovered in Israel more than 25 years ago, is now back in that country and went on display Monday after years spent touring prestigious museums around the world.

World News // 9 hours ago
Zelensky tells G7 leaders Ukraine needs help to end Russia war by year's end
June 27 (UPI) -- Ukrainian President Volodymyr Zelensky called on G7 leaders to make a major push to end Russia's invasion of Ukraine by the end of the year in a virtual address at the group's meeting on Monday.

World News // 10 hours ago
Russia forces build on their success in Severodonetsk in attacks on Lysychansk
June 27 (UPI) -- Luhansk region officials are urging citizens in Lysychansk to evacuate on Monday with the Russian military advancing on the last remaining city still under Ukrainian control in the region.
Advertisement