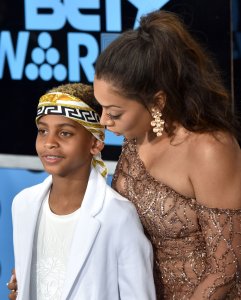 NBA // 11 months ago
Lillard leads Blazers to playoff upset of LeBron's Lakers
Damian Lillard scored a game-high 34 points and the Portland Trail Blazers overcame a LeBron James triple-double performance to earn a win over the Los Angeles Lakers in Game 1 of their Western Conference playoff series.

NBA // 11 months ago
Damian Lillard scores 51, Joel Embiid injured as Blazers beat Sixers
Damian Lillard scorched the nets for 51 points to lead the Portland Trail Blazers to a narrow win against the Philadelphia 76ers in an NBA seeding game in Orlando, Fla.

I want to apologize to my family, fans and the Denver Nuggets organization for my actions early Monday morning

This is my first time making it to the Final Four. Hopefully, it's not my last

We forced shots and they pushed the ball at us. We never gave up

Carmelo Kiyan Anthony (born May 29, 1984), nicknamed "Melo", is an American professional basketball player who currently plays for the New York Knicks in the National Basketball Association (NBA). After a successful high school career at Towson Catholic High School and Oak Hill Academy, Anthony attended Syracuse University for college where he led the Orangemen to their first National Championship in 2003. He earned the tournament's Most Outstanding Player award and was named the Most Valuable Player of NCAA East Regional. After one season at Syracuse University, Anthony left college to enter the 2003 NBA Draft, where he was selected as the third pick by the Nuggets. He was traded to the Knicks several days prior to the 2011 trade deadline.

Since entering the NBA, Anthony has emerged as one of the most well-known and popular players in the league. He was named to the All-Rookie team, to the All-Star team four times and to the All-NBA team four times. Anthony led the Nuggets to two division titles and to the playoffs every year from 2004 to 2010. In 2009, he helped the Nuggets advance to the Conference Finals for the first time since 1985. As a member of the USA National Team, Anthony won a bronze medal at the 2004 Olympics and a gold medal at the 2008 Olympics.

Anthony was born in the Red Hook projects in Brooklyn, New York City. He was born to a Puerto Rican father and an African American mother. His father, after whom he is named, died of cancer when Anthony was two years old. When Anthony turned eight, his family moved to Baltimore, where he honed not only his athletic skills, but his survival skills. Kenny Minor, one of Anthony's childhood friends, said, "from drugs, to killings, to anything you can name that goes on in the roughest parts of town, we've seen and witnessed hands on. Those are the things that teach you toughness and keep you mentally focused on your goals." Sports would serve as an important diversion from the violence and drug dealing that were pervasive in the housing projects a few blocks from the homes of Anthony and his friends.

FULL ARTICLE AT WIKIPEDIA.ORG
This article is licensed under the GNU Free Documentation License.
It uses material from the Wikipedia article "Carmelo Anthony."
Back to Article
/