Oct. 25 (UPI) -- Carmelo Anthony scored a team-high 28 points off the bench and the Los Angeles Lakers overcame a 40-point effort from Memphis Grizzlies guard Ja Morant to earn their first win of the 2021-22 season.

Anthony made 10 of 15 shots, including 6 of 8 3-point attempts, in the 121-118 win Sunday at Staples Center in Los Angeles. He also passed Moses Malone for No. 9 on the NBA's all-time scoring list.

"To pass Moses and know what Moses did for the game of basketball, it's hard to put into words," Anthony told reporters. "I'm excited that I'm here in year 19, still doing what I'm able to do and still passionate about the game, coming to work and getting better.

Lakers forwards Anthony Davis and LeBron James scored 22 and 19 points, respectively. Morant made 5 of 7 3-point attempts and was 13 of 21 from the field. He dished out 10 assists in the loss.

"Carmelo has been doing it for quite a while and it's beautiful to continue to see," James said of Anthony. "Especially when you know [other teams] gave up on him."

The game features 13 lead changes and was tied seven times. The Lakers bench outscored the Grizzlies bench 48-22. The Grizzlies edged the Lakers 62-52 in points in the paint.

Davis scored 10 points in the first 12 minutes to help the Lakers carry a 29-24 lead into the second quarter. Morant, Westbrook and Grizzlies forward Desmond Bane each scored nine in the second and the Lakers led 62-56 at halftime.

James tied the score with a 3-pointer 37 seconds into the final frame. The score was tied two more times in the first 1:40 of the fourth quarter. The Lakers then used a 14-3 run to take a 106-97 advantage with 7:03 remaining.

The Grizzlies cut the deficit to one point, four times down the stretch, but could not tie the score. Morant missed a game-tying free throw attempt with 1.9 seconds remaining.

"I'm very hard on myself so I really don't care about what I did in this game," Morant told reporters. "I missed a free throw to tie it. That's pretty much the only thing on my mind."

Morant and Anthony scored 13 and 12 points, respectively, over the final 12 minutes. 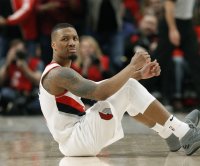