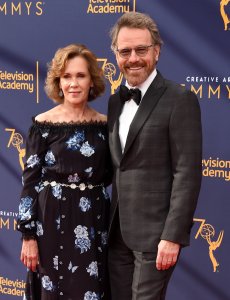 Entertainment News // 2 months ago
Tony Awards: How to watch, what to expect
The 75th annual Tony Awards will take place Sunday at Radio City Music Hall in New York.

TV // 3 months ago
Bob Odenkirk on Bryan Cranston: 'Great actor who really got me dialed in'
Bob Odenkirk discussed his friendship with his "Breaking Bad" and "Better Call Saul" co-star Bryan Cranston while appearing on "Jimmy Kimmel Live."

It makes it a lot more enjoyable to be with them. And then once we finish a scene, contractually they have to go away from us. That makes it more tolerable

They're real normal kids, which is great, because they're not calloused and business-savvy

Bryan Lee Cranston (born March 7, 1956) is an American actor, voice actor, writer and director. He is best known for his roles as Hal, the father in the Fox situation comedy Malcolm in the Middle, and as Walter White in the AMC drama series Breaking Bad, for which he has won three consecutive Outstanding Lead Actor in a Drama Series Emmy Awards. Other notable roles include Dr. Tim Whatley on Seinfeld, Doug Heffernan's neighbor in The King of Queens, Astronaut Buzz Aldrin in From the Earth to the Moon, and Ted Mosby's boss on How I Met Your Mother.

Cranston was born in Canoga Park, California, the son of Peggy Sell and actor Joe Cranston. He grew up in the Los Angeles area, graduating from Canoga Park High School. Cranston studied police science in college.

He began his acting career after college in local and regional theatres, getting his start at the Granada Theatre in the San Fernando Valley. Cranston has worked regularly since the late 1980s, mostly in minor roles. His advertising work includes commercials for Lay's potato chips, Excedrin, Honda Accord, and Coffee-Mate. His voice acting includes English dubbing of Japanese anime, under the name "Lee Stone". He was an original cast member of the ABC soap opera Loving, where he played Douglas (Doug) Donovan from 1983 to 1985. Cranston also starred in the short-lived series Raising Miranda in 1988.

FULL ARTICLE AT WIKIPEDIA.ORG
This article is licensed under the GNU Free Documentation License.
It uses material from the Wikipedia article "Bryan Cranston."