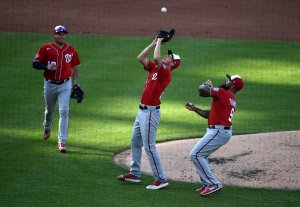 MLB // 1 year ago
Max Scherzer strikes out 10, Nationals hold off Orioles
Max Scherzer had 10 strikeouts and the Washington Nationals held off a late rally from the Baltimore Orioles to earn a road victory Sunday at Oriole Park at Camden Yards.

MLB // 2 years ago
Howie Kendrick's 4-hit night leads Nationals past Mets
Howie Kendrick had four hits -- including a 414-foot home run -- to lead the Washington Nationals to a 5-3 win against the New York Mets at Nationals Park.

After coming up through the Seattle Mariners organization, he was acquired by the Indians on June 30, 2006, in exchange for Eduardo Perez. Cabrera spent the remainder of the 2006 season at Cleveland's Triple-A minor league team, the Buffalo Bisons.

Cabrera was a non-roster invitee to the Indians 2007 spring training but was reassigned to their minor league camp March 16. He started 2007 at Double-A with the Akron Aeros and was named to the Eastern League mid-season All-Star team. He was promoted to the Indians' Triple-A affiliate, Buffalo Bisons July 30 and then to Cleveland August 7. Cabrera made his major league debut the following night against the White Sox, starting at second base. He was hitless in three at-bats and scored a run after he was hit by a pitch in the sixth inning. Four days later, Cabrera picked up his first major league hit, a double, against Mike Mussina of the New York Yankees. Cabrera's first home run came August 18, 2007, off Jason Hammel of the Tampa Bay Devil Rays in a 8-1 victory for the Indians. Cabrera eventually assumed Cleveland's everyday second baseman job despite being a natural shortstop, taking over for an ineffective Josh Barfield.

FULL ARTICLE AT WIKIPEDIA.ORG
This article is licensed under the GNU Free Documentation License.
It uses material from the Wikipedia article "Asdrubal Cabrera."