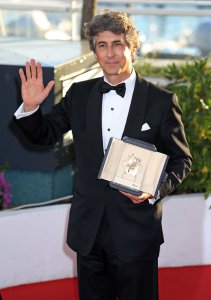 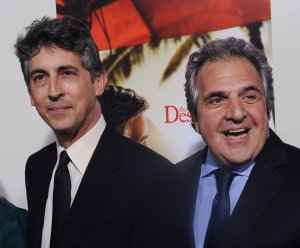 Movies // 6 years ago
Reese Witherspoon joins Matt Damon in 'Downsizing'
Reese Witherspoon will star alongside Matt Damon in new Alexander Payne satire "Downsizing."
TV // 7 years ago
'Gravity,' 'Hustle,' 'Slave' lead a competitive Oscar field
"Gravity" and "American Hustle" go into Sunday's Oscar race in Los Angeles with 10 nods apiece, while "12 Years a Slave" is close behind with nine nominations.
Entertainment News // 7 years ago
Oscars 2014: A Brief Look at the Nominees
A brief look at some of this year's Academy Award contenders.
TV // 7 years ago
Aaron Sorkin to be presented with Screenwriters Tribute at film fest
Aaron Sorkin is to be presented with the Screenwriters Tribute at the 19th annual Nantucket Film Festival in Massachusetts.
Movies // 7 years ago
'Gravity,' 'Hustle' each earn 10 Oscar nominations
"Gravity" and "American Hustle" led the field with 10 nods apiece when Oscar nominations were announced Thursday in Beverly Hills, Calif.
Movies // 7 years ago
'12 Years a Slave' leads field with 7 Independent Spirit Award nods
Director Steve McQueen's epic "12 Years a Slave" led the field with seven nods, including Best Feature, when nominations were announced in Los Angeles.

A lot of people, including Bob Rafelson himself, said this performance was in the vein of Nicholson's '70s performances, beginning with 'Five Easy Pieces,

Constantine Alexander Payne (born February 10, 1961) is an American Academy Award-winning film director and screenwriter. His films are noted for their dark humour and satirical depictions of contemporary American society. His films also revolve around adultery in marriage and relationships. He also tends to set his films in Omaha. He has scenes of historical landmarks and museums in his films, and tends to use actual people for minor roles (real cops play cops, real teachers play teachers, etc.). He frequently incorporates telephone monologues as a dramatic device. He also tends to cast actor Phil Reeves in his films. He is on the short list of directors who have final cut rights for their films. In 2005 he became a member of the Board of Governors of the Academy of Motion Picture Arts and Sciences (Directors Branch). His writing partner is Jim Taylor.

Payne, a Greek American (his grandfather's family name was Anglicized from Papadopoulos), was born in Omaha, Nebraska to parents who were restaurant owners. He grew up in the same neighborhood as billionaire Warren Buffett, attended Creighton Preparatory School high school and later Stanford University where he double majored in Spanish and History. As a part of his Spanish degree, he studied at the University of Salamanca (Spain). Payne got his MFA in 1990 from the UCLA Film School.

Payne worked in various capacities on films and television before he wrote and directed his first full-length film Citizen Ruth in 1995. His film Election, starring Matthew Broderick and Reese Witherspoon, which takes aim at politics and education in America, attracted attention when New Yorker film critic David Denby named it the best film of 1999. Payne was nominated for an Academy Award for Writing Adapted Screenplay for Election. In 2000 he did an uncredited polish-up of the screenplay for the comedy hit Meet The Parents. In 2001 Payne wrote a draft of Jurassic Park III. In 2003 he received a Golden Globe for his screenplay for About Schmidt, which also won the Writers Guild of America Award for Best Adapted Screenplay. To the surprise of many who kept track of Hollywood news, Payne and his writing partner Jim Taylor were not nominated for an Oscar for the About Schmidt screenplay. He won both the Academy Award and Golden Globe in 2005 for Best Screenplay for Sideways while the film also won the Golden Globe for Best Picture - Musical or Comedy. In total, Sideways received five Academy Award Nominations. Payne served as an executive producer on the films King of California and The Savages. He also teamed up once again with writing partner Jim Taylor to write a draft of the screenplay for the film I Now Pronounce You Chuck and Larry, a comedy directed by Dennis Dugan starring Adam Sandler and Kevin James. Payne disliked the final product, stating that Adam Sandler rewrote so much of the story that almost all of what Payne and Taylor wrote was gone.

FULL ARTICLE AT WIKIPEDIA.ORG
This article is licensed under the GNU Free Documentation License.
It uses material from the Wikipedia article "Alexander Payne."
Back to Article
/