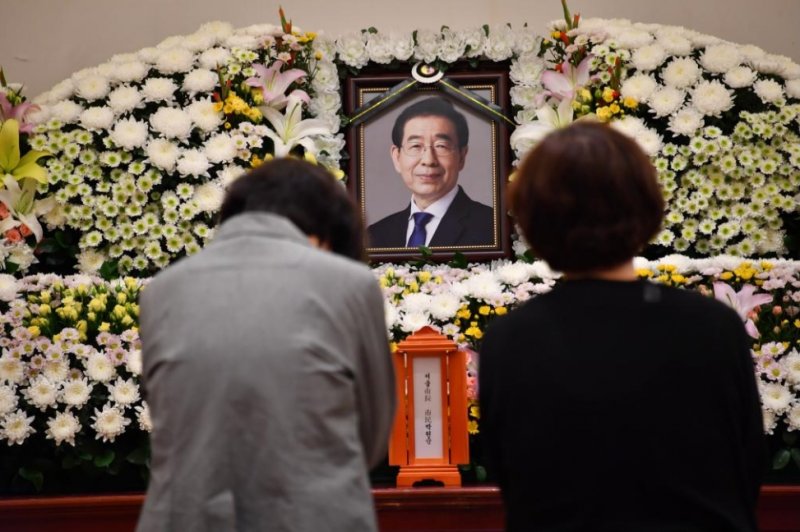 July 10 (UPI) -- South Korean supporters of Seoul Mayor Park Won-soon have begun to circulate a photo they claim shows the woman who had filed a criminal complaint of sexual harassment against him, in retaliation for his sudden death late Thursday.

Images of the former employee that began to emerge on local social media platforms including KakaoTalk have been dismissed at Seoul city hall, however, Yonhap reported.

According to city hall, the photo is of the wrong person."The photo is that of a past event held by the city of Seoul," the city said in statement. "It is disseminating rapidly across the Internet, without actual verification."

The city said the "fake news" photo is causing emotional distress for the person shown, who has "no relation to the case." The city said it would take "strong legal action" against online users who share and upload the images.

Seoul police is taking the activity of online communities seriously. The woman had alleged Park sexually harassed her multiple times.

A senior police official told local news service News 1 police plan to protect the victim. Police are not ruling out the possibility of providing her temporary housing, or even a smart watch to track her location.

The police statement comes after members of an online site mourning the death of Park began to post articles and photos that they claimed were photos of Park's former secretary.

The community crowdsourced images of 17 city hall employees who were working in the mayor's office in 2017, in order to identify the woman who had filed the complaint the same day Park died, according to News 1.

South Korea's ruling Democratic Party had not commented on the allegations Friday.

Party leader and lawmaker Lee Hae-chan said, "it is not courtesy" to address the complaint when asked by reporters at Park's funeral.

Park's death means the complaint has been rendered null and void, and prosecutors must give up the case, according to local law.

World News // 1 hour ago
India surpasses milestone 4,000 deaths in a single day
May 8 (UPI) -- India set a new national record Saturday of more than 4,000 deaths from COVID-19 in the previous 24 hours, according to the health ministry.

World News // 21 hours ago
Korean firms chalk up record profits amid COVID-19
SEOUL, May 7 (UPI) -- COVID-19 may have had a devastating impact on the global economy, but some South Korean companies racked up outstanding earnings during the first quarter of 2021.