A Pakistani migrant waits Saturday to board a train heading for Austria, in Tovarnik, Croatia. European Union interior ministers on Tuesday approved a plan that would relocate 120,000 migrants through mandatory quotas across the continent. Photo by Achilles Zavalli/UPI | License Photo

BRUSSELS, Sept. 22 (UPI) -- European Union interior ministers on Tuesday approved a plan that brought contentious debate over the relocation of about 120,000 migrants through mandatory quotas across the continent.

Most migrants seeking asylum are currently in Italy, Greece and Hungary. The proposed quota plan would relocate the majority of asylum-seekers to Germany, France, Spain, Poland and the Netherlands.

A migrant crisis has escalated throughout this year as people flee conflict and poverty mainly from Syria, but also from Afghanistan, Eritrea and Iraq.

More than 156,000 migrants crossed into the European Union in August, meaning more than 500,000 migrants have entered since the start of the year, EU border agency Frontex said.

Migrants have arrived in Europe in often-dangerous journeys through the Mediterranean Sea and by land. Migrants from Syria, Eritrea and Iraq will be prioritized under the relocation plan, which needs to be ratified by EU leaders in Brussels, Belgium, on Wednesday.

Germany will take in the most migrants -- 40,000 -- through the quotas. The United Kingdom, Ireland and Denmark can choose if they wish to participate in the quota program.

Hungary, Romania, Slovakia and the Czech Republic voted against mandatory quotas, but none has said if they would appeal the vote. EU member countries that refuse to accept relocated migrants face a financial penalty of 0.002 percent of gross domestic product.

But as more than 500,000 migrants seeking refugee status are estimated to have already entered the EU, relocating 120,000 is insufficient, according to the United Nations High Commissioner for Refugees.

"A relocation program alone, at this stage in the crisis, will not be enough to stabilize the situation," UNHCR spokeswoman Melissa Fleming said, adding the numbers to relocate migrants under the quota proposals would need to be increased significantly.

World News // 3 hours ago
South Korean pastor accused of calling women followers 'prostitutes'
March 1 (UPI) -- A South Korean church leader is coming under fire for allegedly describing the women in his congregation and in the Bible as "prostitutes."

World News // 3 hours ago
Volkswagen says it will unveil autonomous minibus next year
March 1 (UPI) -- After years of a rumored return, Volkswagen's iconic minibus took a step closer to becoming a reality Monday -- and the automaker said it will be a self-driving vehicle. 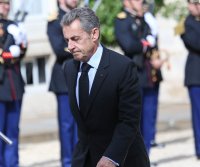