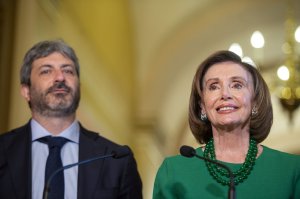 World News // 3 years ago
Slovak ex-soldier reportedly confesses to journalist's death
A former Slovak soldier has allegedly confessed to the shooting and death of journalist Jan Kuciak and his fiancée Martina Kusnirova after the National Crime Agency interrogated him.

World News // 4 years ago
Slovak prime minister resigns after murder of journalist
Slovak Prime Minister Robert Rico resigned after the murder of a journalist who reported on potential links between organized crime and government officials.

World News // 5 years ago
Canada's Justin Trudeau headed to Brussels to sign CETA trade deal with EU
Canada and the 28 member nations of the European Union agreed to a free trade deal after seven years of negotiations and it is expected to be signed Sunday.

His relatively new left-wing party Direction – Social Democracy (Slovak: SMER – Sociálna demokracia) was the winner of the parliamentary elections in 2006, receiving approximately 30 percent of the cast votes. After the victory he created a coalition with the Slovak National Party an extremist nationalist party led by Ján Slota and with the People's Party - Movement for a Democratic Slovakia led by Vladimír Mečiar.

Fico was born in a working class family on September 15, 1964, in the town of Topoľčany. His father was a forklift operator and his mother worked in a shoe store. Fico has two siblings, a brother Ladislav and a sister Lucia. He is married to a wife Svetlana, they have one son.

FULL ARTICLE AT WIKIPEDIA.ORG
This article is licensed under the GNU Free Documentation License.
It uses material from the Wikipedia article "Robert Fico."