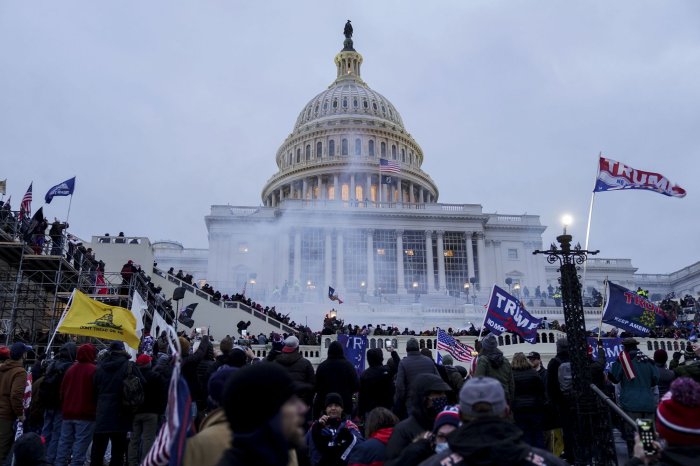 Jan. 6 (UPI) -- The U.S. Sergeant-at-Arms and Capitol police announced on Wednesday night that the U.S. Capitol building was secure hours after supporters of President Donald Trump breached a police barricade and forced their way inside and spurring a lockdown.

On Wednesday night, New York Gov. Andrew Cuomo said he would deploy 1,000 members of the New York National Guard to Washington, D.C. for up to two weeks.

"A peaceful transition of power is the cornerstone of our democracy and New York stands ready to help ensure the will of the American people is safely carried out," he said.

Authorities deployed tear gas to disperse the crowd surrounding the Capitol ahead of a 6 p.m. curfew ordered by Washington, D.C., Mayor Muriel Bowser, which is set to last through 6 a.m. Thursday. She said no one other than essential workers and working media may be in public places or use transportation during the curfew hours.

Northam also instituted a 6 p.m. to 6 a.m. curfew for Alexandria and Arlington and declared a state of emergency.

A pipe bomb found at the headquarters of the Republican National Committee, a block away from the Capitol building, was successfully destroyed by a bomb squad, an RNC official said, according to The New York Times.

Additionally, the headquarters of the Democratic National Convention was evacuated after an unidentified package was found.

Washington, D.C. Metropolitan Police Department Chief Robert Contee said that about 13 people were arrested and about five weapons were recovered.

"We were looking at just above 13 arrests. I should add, very important to note here, that none of the arrests that occurred were D.C. residents. All the individuals who were arrested, all were from out of the area," he said.

CNN, NPR and The Washington Post, citing unnamed sources, reported at least one person was shot on the Capitol grounds and was receiving emergency care. D.C. police spokesman Dustin Stermbeck said the woman has died.

Thousands gathered on and around the National Mall earlier to hear remarks by Trump, who falsely claimed he won November's presidential election "in a landslide."

After his speech, some protesters clashed with police, breaking through a police line, forcing their way to the Capitol, where members of Congress debated certification of the Electoral College win by President-elect Joe Biden.

Protesters made their way inside the building, walking through Statuary Hall. At least one protester was pictured sitting in the Senate well. In the afternoon, protesters were also seen destroying camera gear and other media equipment outside of the Capitol.

Images from the scene appeared to show police involved in an armed standoff with someone attempting to enter the House doors.

Biden called on those at the Capitol, whom he described as "extremists" and a "mob," to pull back and "allow democracy to go forward" while urging Trump to deliver a speech on national television. Vice President-elect Kamala Harris tweeted Wednesday evening that she joined Biden in "calling for the assault on the Capitol and our nation's public to end."

Shortly afterward, Trump released a video on Twitter in which he continued to repeat claims that the election was "stolen from us" but called on people to leave the Capitol and go home.

Facebook and YouTube removed the video with Facebook Vice President of Integrity Guy Rosen saying "it contributes to rather than diminishes the risk of ongoing violence" and YouTube saying it repeated false information about the outcome of the election. Twitter initially restricted the video, preventing people from liking, retweeting or replying to the post and later followed suit in removing it.

Later in the evening, however, Trump tweeted that the breach of the Capitol building was a result of when "a sacred landslide election victory is so unceremoniously and viciously stripped away from great patriots who have been badly and unfairly treated for so long."

Congress, which had split into separate sessions to debate an objection to Arizona's electoral votes, was forced to go into recess and Vice President Mike Pence and members of Congress were evacuated due to the violence outside.

When the session resumed Wednesday night, Pence, who earlier declined to intervene in the electoral vote certification process, condemned the violence in the Capitol.

"To those who wreaked havoc in our Capitol today, you did not win. Violence never wins. Freedom wins and this is still the People's House," he said.

Rep. Jim McGovern, D-Mass., told reporters that lawmakers were told to use gas masks after tear gas was deployed in the rotunda.

"I just had to evacuate my office because of a pipe bomb reported outside. Supporters of the president are trying to force their way into the Capitol and I can hear what sounds like multiple gunshots," Rep. Elaine Luria, D-Va., tweeted.

"I don't recognize our country today and the members of Congress who have supported this anarchy do not deserve to represent their fellow Americans."

Additionally, public COVID-19 testing sites have been closed for the day.

Trump called on the protesters to be peaceful in tweets after the violence started.

"Please support our Capitol Police and Law Enforcement. They are truly on the side of our Country," he tweeted.

Earlier Wednesday, Trump spoke during a protest at the Ellipse on the National Mall dubbed the "March for Trump/Save America" rally, organized by supporters who back his unsubstantiated claims that the election was "rigged" against him.

As he opened his remarks, Trump slammed the "fake news media" for not showing what called the "hundreds of thousands" of people at the event, saying, "the media is the biggest problem we have, as far as I'm concerned."

The U.S. Park police told NPR that permits for the rally had been approved and amended by its organizers to increase the capacity from 5,000 to 30,000 people.

The crowd roared its approval as Trump went on to claim he will never concede his loss to Biden because "you don't concede when there's theft involved. We won this election, and we won it by a landslide. This was not a close election."

He also condemned what he called "weak Republicans" who have not backed his attempts to overturn the results of the election.

U.S. News // 10 minutes ago
Death row inmate's attorneys called sentence 'justifiable lynching' in 1999 hearing
Feb. 5 (UPI) -- Attorneys for a Black death row inmate in Texas are seeking that his sentence be relieved in light of evidence detailing racists attitudes and actions from his previous counsel and the all-White jury that sentenced him.

U.S. News // 1 hour ago
NYPD seeking suspect who shot off-duty officer in the head in robbery
Feb. 5 (UPI) -- A New York Police Department officer is in critical condition after being shot in the head during a robbery attempt as he attempted to buy a vehicle from Facebook Marketplace.

U.S. News // 2 hours ago
No jackpot winners in Saturday's Powerball drawing, prize reaches $747 million
Feb. 5 (UPI) -- Nobody claimed the Powerball jackpot for the 33rd time in a row on Saturday, pushing the grand prize to $747 million ahead of Monday's drawing.

U.S. News // 1 day ago
Sixth Memphis police officer fired over Tyre Nichols beating
Feb. 4 (UPI) -- The Memphis Police Department has fired a sixth officer for conduct related to the beating of Tyre Nichols. Officer Preston Hemphill was seen using a Taser on Nichols in body-cam footage that was released.
Advertisement