People gather to lay flowers outside the entrance of the Mamba Sports Academy in Thousand Oaks in memory of Bryant. Photo by John McCoy/UPI | License Photo

Trevor Benkie (L) looks toward the scene where firefighters work to contain smoldering wreckage from a helicopter crash that claimed the life of 9 people. Photo by John McCoy/UPI | License Photo

Brothers, Dylan (L) and Ryan Kunert sit near the crash site. The weather conditions were not up to standard while the helicopter was flying. Photo by John McCoy/UPI | License Photo

Jan. 27 (UPI) -- The U.S. National Transportation Safety Board has sent a team of investigators to Southern California to examine the helicopter crash that killed basketball icon Kobe Bryant, his teenage daughter and seven others, officials said.

The top U.S. civil aviation body sent an 18-member "go team" to the rugged and mountainous crash site near Calabasas, Calif. The team will pay particular attention to the weather conditions at the time the chopper crashed. The Federal Aviation Administration is also investigating the crash.

"NTSB Go Team meeting Monday morning to organize investigative groups that will focus on specific areas of interest in [the] investigation," the NTSB said Monday.

The helicopter carrying Bryant and his 13-year-old daughter Gianna went down in foggy conditions. The Sikorsky S-76 helicopter was making a climbing left turn immediately preceding the crash, and ground controllers at one point told the pilot he was "too low," ESPN reported.

The skies were so foggy, in fact, the conditions had grounded helicopters of the Los Angeles Police Department and Los Angeles County Sheriff's Department on Sunday morning.

"The weather situation did not meet our minimum standards for flying," LAPD spokesman Josh Rubenstein told the Los Angeles Times.

Federal investigators will look into a report that Bryant's party received "special permission" from air traffic controllers when other aircraft were grounded due to the fog, KNBC-TV reported.

Also killed in the crash was college baseball coach John Altobelli, his wife Keri and daughter Alyssa and assistant girls basketball coach Christina Mauser. The other three were identified by relatives as Sarah Chester and her daughter Payton, and pilot Ara Zobayan. They were associated with Bryant's Mamba Sports Academy and it was reported they were headed there for a basketball game Sunday when the chopper crashed.

Authorities said it could take days to recover the bodies from the mountainous crash site and make official identifications. Los Angeles County Sheriff Alex Villaneuva called the terrain a "logistical nightmare" and said it's tough to navigate even in daylight in good weather conditions.

"In closing, 9 lives were lost today in this tragedy, I want to reiterate my heartfelt condolences to all of their family and friends," he said early Monday. "I am a father, a brother and son...I cannot imagine their pain and ask all of us to keep them in your prayers."

Bryant, 41, who retired from the NBA four years ago, was honored worldwide upon news of his death Sunday. He was frequently mentioned by winners at the 62nd Grammy Awards Sunday night, which were held at Staples Center, the home venue of Bryant's Los Angeles Lakers. Additional tributes were seen during NBA games all day Sunday, in which multiple teams began by intentionally taking a 24-second shot clock violation and then an 8-second half-court violation to honor Bryant's jersey numbers, 8 and 24.

"Kobe was a legend on the court and just getting started in what would have been just as meaningful a second act," said longtime basketball fan and former President Barack Obama. "To lose Gianna is even more heartbreaking to us as parents. Michelle and I send love and prayers to Vanessa and the entire Bryant family on an unthinkable day."

"Kobe was so much more than an athlete, he was a family man," added former Lakers teammate Shaquille O'Neal. "That was what we had most in common. I would hug his children like they were my own and he would embrace my kids like they were his. His baby girl Gigi was born on the same day as my youngest daughter Me'Arah."

After retiring from basketball, Bryant started his own media production company and was active in producing content, such as his popular Detail series for ESPN in which he analyzed game film of certain NBA players and games.

U.S. News // 36 minutes ago
Treasury Dept. launches web portal to help non-filers get rebates faster
April 10 (UPI) -- The Treasury Department and the Internal Revenue Service introduced an online tool on Friday designed to speed rebate checks to non-filers in 2018 and 2019. 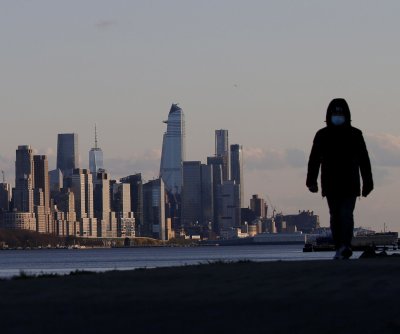