Kirk said the proposed cards would be modeled after Common Access Cards distributed to active-duty military reserve members by the U.S. Defense Department.

"We think that a Social Security card should be hard to forge (and) that it should also make it easy to catch an identity-theft crime," Kirk said.

The new cards would cost $8 to make compared to the 50 cents for current versions of the cards.

Current Social Security cards have no security features other than a signature. 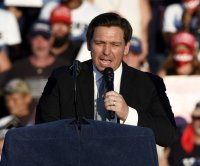 U.S. News // 5 hours ago
Britney Spears' new lawyer files petition to replace father as conservator
July 26 (UPI) -- The new attorney for pop star Britney Spears on Monday petitioned a California court to remove her father as her conservator and replace him with a professional fiduciary.

U.S. News // 20 hours ago
5 killed, including deputy, during California hostage standoff
July 26 (UPI) -- Five people, including a sheriff's deputy, were killed amid a multi-hour standoff with a gunman who had barricaded himself with family members within a southern California residence, officials said.

World News // 6 hours ago
Olympics: Tattoos on display in Tokyo despite cultural stigma
July 26 (UPI) -- Tattoos are widely on display among athletes at the Tokyo 2020 Olympic Summer Games, despite the country's longstanding taboos against skin markings.

Defense News // 7 hours ago
Five companies picked for prototypes of Bradley M2 tank replacement
July 26 (UPI) -- Five defense contractors have been awarded contracts for the second phase of development of the Optionally Manned Fighting Vehicle, which is planned to replace the M2 Bradley tank.