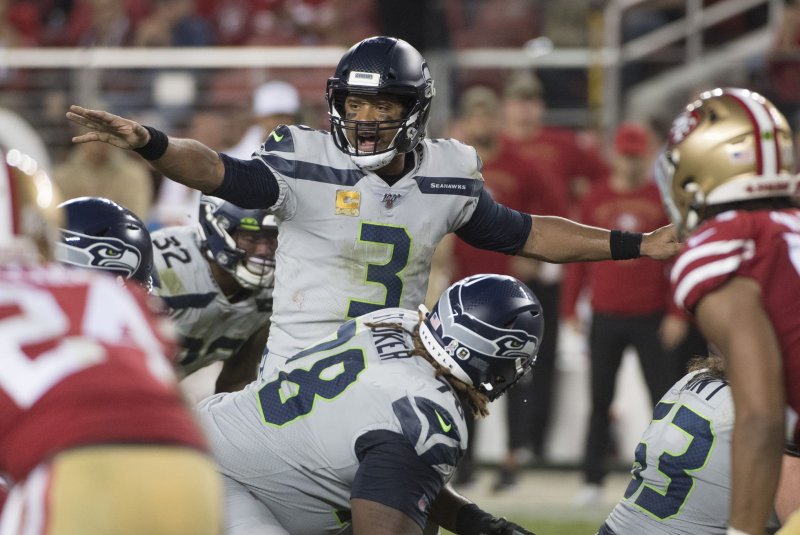 Seattle Seahawks quarterback Russell Wilson (3) completed 24 of 34 passes for 232 yards, one score and an interception in a win against the San Francisco 49ers Monday in Santa Clara, Calif. Photo by Terry Schmitt/UPI | License Photo

San Francisco 49ers quarterback Jimmy Garoppolo (10) completed 24 of 46 passes for 248 yards, one score and an interception, but also lost two fumbles in a loss to the Seattle Seahawks Monday in Santa Clara, Calif. Photo by Terry Schmitt/UPI | License Photo

Nov. 12 (UPI) -- Jason Myers snuck in a 42-yard field goal in overtime to lift the Seattle Seahawks to a win on Monday Night Football, ending the hopes of a perfect season for the San Francisco 49ers.

Myers' kick came with just four seconds remaining in the period, to lead Seattle to the 27-24 win Monday at Levi's Stadium in Santa Clara, Calif. The Seahawks (8-2) overcame a 10-0 deficit in regulation before holding onto a lead for most of the second half. San Francisco (8-1) made two fourth-quarter field goals to force overtime, but rookie kicker Chase McLaughlin missed a potential game-winning attempt on the 49ers' first drive of overtime.

Seahawks quarterback Russell Wilson made a series of clutch plays down the stretch, allowing Myers to win the game. San Francisco quarterback Jimmy Garoppolo lost two fumbles and threw an interception in the loss.

"That was the craziest game I've ever been a part of," Wilson told reporters. "Talk about a Monday Night Football game, that felt like an NFC Championship game right there. It was just back and forth, back and forth, with two great teams going after it."

The 49ers got a 43-yard field goal from McLaughlin on the game's opening drive to take a 3-0 edge. Garoppolo connected with Kendrick Bourne for a 43-yard touchdown on San Francisco's next driving, pushing the lead to 10-0.

The Seahawks finally got on the scoreboard after Jarran Reed sacked Garoppolo, forcing him to fumble. Jadeveon Clowney collected the fumble and returned it for a 10-yard score, making the score 10-7 at halftime. The Seahawks took their first lead of the game when Wilson lobbed a pass to tight end Jacob Hollister with 4:44 remaining in the third quarter.

Seahawks running back Chris Carson made the score 21-10 with a one-yard rushing touchdown with 1:46 remaining in the third frame. The 49ers' pass rush got to Wilson in the fourth quarter, with Arik Armstead and K'Wuan Williams getting to the MVP candidate for a sack. Wilson fumbled on the play and the ball was recovered by Germain Ifedi. The Seahawks offensive lineman also fumbled and gave the ball back to the 49ers. DeForest Buckner picked up the fumble and scored on a 12-yard return, making it a three-point game.

FINAL: The @Seahawks hand the 49ers their first loss in an OT thriller! #SEAvsSF #Seahawks

Wilson marched the Seahawks down the field on the first drive of overtime, before being intercepted by Dre Greenlaw in the red zone. McLaughlin missed his game-winning attempt on the resulting drive, giving the ball back to Wilson. The Seahawks star orchestrated a seven-play, 40-yard drive, marching Seattle to the San Francisco 24-yard line and setting Myers up for the game-winning kick.

"So you want a nice easy win and just can feel it from the beginning of the game, you know with the guac and the chips and just kind of kick back? It ain't happening. It ain't happening," Seahawks coach Pete Carroll said. "They took us all the way until there was nothing left and it was a beautiful job of hanging."

Fred Warner had nine tackles, two sacks, a forced fumble and a pass defensed in the loss.

"You're always disappointed when you don't win, especially, when we felt we had a number of chances," 49ers coach Kyle Shanahan said. "I was very proud of our guys. I thought we competed very hard. Guys left it all out there. I know guys are hurting right now."

The Seahawks face the Philadelphia Eagles at 8:20 p.m. EST Nov. 24 at Lincoln Financial Field in Philadelphia. The 49ers host the Arizona Cardinals at 4:05 p.m. Sunday at Levi's Stadium.