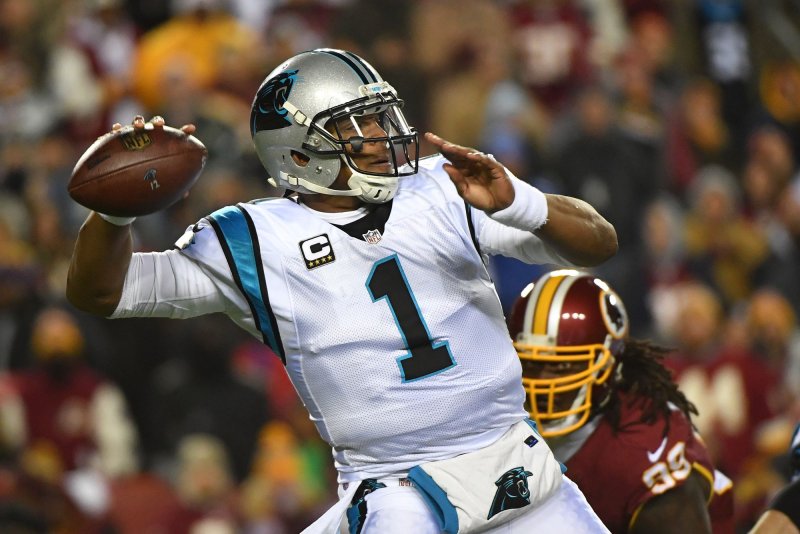 SERIES HISTORY: 10th regular-season meeting. Eagles lead series, 6-3. The last meeting was in 2015 in Charlotte in Chip Kelly's final season as Philadelphia's head coach. The Panthers won, 27-16, dominating the Eagles on the ground. They rushed for 204 yards, including 125 by Jonathan Stewart. The most memorable game of the series was when they met in the 2003 NFC Championship Game in Philadelphia. The Panthers won that game as well.

KEYS TO THE GAME: Not that it's unusual, but this game is surely a tale of two quarterbacks.

For Panthers quarterback Cam Newton, significant strides have been made in the past two games, as he has had regular practice repetitions and parlayed that into huge outings against New England and Detroit. Now comes the next part of the recovery from offseason shoulder surgery. While the Panthers went light on Newton's workload in the preseason and during the first few weeks of the season, there's no reprieve going into Thursday night's games. Newton will be throwing on short rest.

"I have to trust the coaches and trust the process when it comes to my arm, knowing that certain throws (are tough)," Newton said.

As for Eagles quarterback Carson Wentz, it will be important to continue the excellence he has displayed on third down in the first five games of the season.

Wentz completed 11 of 12 third-down passes against the Cardinals Sunday for 225 yards and three touchdowns. Through five games, he's first in the league in third-down passing with a 137.8 passer rating, more than 17 points ahead of Tom Brady, who is second.

The Eagles are currently first in the NFL in third-down efficiency, converting 53.4 percent of their third-down opportunities. The Panthers are second with a 50.0 third-down conversion rate. Whoever wins the third-down battle Thursday night is likely to win the 60-minute war.

A large part of the Eagles' third-down success has been a commitment to the run. They have averaged 38 carries per game and have rushed for 529 yards the last three weeks.

Meanwhile, the Panthers will be intent on resurrecting their rushing attack. They had only 28 rushing yards at Detroit last Sunday.

Newton and the offense will also have to be mindful of Philadelphia's blitz tendencies. Through five games, the Eagles' opponent passer rating when they send five or more rushers is 58.0. Last year it was 89.6. Opponents have a 46.5 completion percentage and are averaging just 4.5 yards per attempt when the Eagles blitz.

Eagles RT Halapoulivaati Vaitai vs. Panthers DEs Julius Peppers and Charles Johnson. Youth vs. 27 combined years of NFL experience. Vaitai, who will likely be subbing for concussed Lane Johnson, has his work cut out for him.

Panthers WRs Devin Funchess and Kelvin Benjamin vs. Eagles CBs Jalen Mills, Rasul Douglas and Patrick Robinson. Funchess and Benjamin both are big, strong 6-foot-5 targets who are going to be tough matchups for the Eagles' cornerbacks.

Eagles RB LeGarrette Blount vs. Panthers MLB Luke Kuechly. Blount has a team-high 13 rushing first downs and is averaging 5.1 yards per carry on first down. If the Eagles can't get Kuechly blocked, though, it's going to be a long night.

PLAYER SPOTLIGHT: Carolina linebacker Thomas Davis. The franchise's all-time leader in tackles has been hampered by some ailments, but he continues to make an impact. The Eagles often bring out some of the best in Davis, so he could be fired up again. In 2015, he posted a season-high 14 tackles against the Eagles and in 2012 he recovered a fumble at Philadelphia to set up the game-winning field goal.

PREDICTION: This battle of 4-1 teams is virtually a toss-up. Both teams have play-making quarterbacks and receivers that have the ability to also make plays. The difference could come down to whether Eagles right tackle lane Johnson can play. Having a Thursday game while in concussion from Sunday protocol makes it nigh impossible to clear the program in time, especially with Philadelphia having to travel. His likely absence tips the scales in Carolina's favor.